Our coverage of this game is brought to you by: 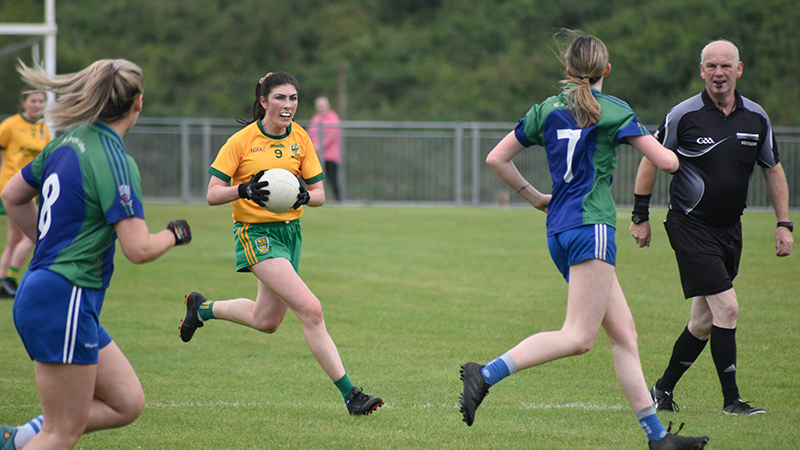 The Leitrim Ladues SFC reaches it's conclusion this weekend whilst the IFC semi finals are also scheduled to take place. Here's the brief ahead of three massive games.

The Senior final takes place in Avant Money Sean Mac Diarmada Pairc on Sunday afternoon at 3:00 and it throws together Glencar-Manorhamilton and Ballinamore Sean O'Heslins, a repeat of the 2020 final.

If this year is anything like that final, it will be entertaining. Glencar-Manor were dominant in the group stages, with their free scoring forwards being complimented by a well rounded team supporting both Muireann Devaney and Leah Fox who contributed most of the scoring.

Sean O'Heslins are looking to recover from a loss last weekend in the Senior B final to Kiltubrid. They struggled in places through the group stages, a disappointing loss to St. Joseph's standing out.

Manor will go in as favourites but Ballinamore have showed in this particular fixture against this particular opponent that they can never be written off, as a maximum of four points have seperated these sides in their last three competitive meetings in both league and championship. With this in mind Ballinamore seem better suited to face Manor then any team in the county.

Ballinamore also possess more scorers than Manor, but the latter are a more well rounded team. Rumours abound that Ailbhe Clancy is set to travel home from her Dubai base, a huge boost for Manor. Her presence could very well help the three in a row case.

For Ballinamore, the key to victory lies in keeping Fox and Devaney quiet. It's a big ask, but if they manage that then they've given themselves a great chance at securing their first Senior title.

These two sides met in one of the most exciting clashes of the championship a couple of weeks ago, with missed penalties, goalkeepers scoring them and only a point separating the final score all taking place. Now, they face off to ensure senior survival.

Dromahair are still looking for their first win of the season, so now is a good time to step up. The forwards are capable of scoring, but Niamh McDonagh will look to keep Roisin and Amy Fowley at bay.

Given how their championship has gone, Dromahair will surprisingly enter as slight favourites. But as the last fixture proved, it can go any way between these two sides, another excellent performance from St. Francis could be enough to keep them at the top table for next season.

Mary's come into this one as clear favourites. Drumkeerin have been rattled by the emigration of Annemarie Gallagher and the season ending injury of Niamh Ryan, their only county player.

Mary's have boasted some impressive results without really getting out of second gear this term and likely progress to the final again this weekend. However, a performance against the winners of St. Brigid's and Mohill will have to be better to go one further than last year's defeat to Dromahair.

This is likely to be a lot closer than the first semi final. These two have already met in this years championship, with Dearbhaile Beirne being kept quiet en-route to a Brigid's victory.

If Brigid's can repeat that type of performance, they should win. But Mohill won this title two years ago and the core of the squad knows what it takes to win it out.

Síomha Quinn has been great for Brigid's, helped massively by Carla Leguen, Sinead Quinn and Mary McKeon. Aisling Quinn and Ciara Gaffney have been solid in midfield and since coming back from injury, Tara Fitzpatrick has racked up a few points.

For Mohill, Denise Stenson, Deirdre Ward and Charlene Tyrrell in the middle will be key to providing a platform for the attack. Their chances of winning a championship could also be swung depending on Beirne's availability. Sarah Boyle has emerged as a genuine talent and coupled with the strong running of Emma Quinn, they're bound to be in this.

This one will simply come down to whichever defence stands up the most on the day.