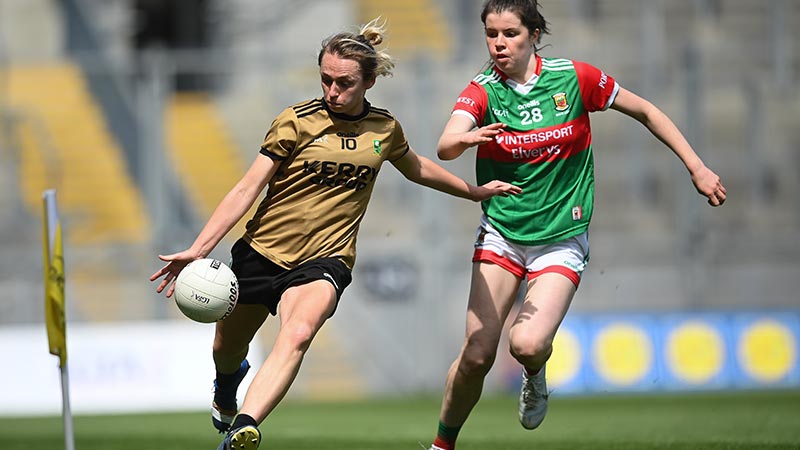 Síofra O’Shea grabbed two goals and Kerry turned on the style against Mayo at Croke Park to book their place in the TG4 All-Ireland Senior Championship Final for the first time since 2012.

Aishling O’Connell and Paris McCarthy were also among the goals as the Kingdom backed up their impressive quarter-final success over Armagh with a commanding performance. The evergreen Louise Ní Mhuircheartaigh was also in outstanding form for the victors, scoring 0-5, all from play.

After Shauna Howley edged Mayo in front with a pointed free, Kerry announced their arrival in the contest when wing-back O’Connell floated a deflected effort beyond the reach of goalkeeper Aisling Tarpey for a sixth-minute goal.

Mayo full-forward Ciara Whyte responded to back-to-back points from Emma Costello and Ní Mhuircheartaigh, before Kerry rattled the net for a second time on 11 minutes, when O’Shea palmed to net off of a Cáit Lynch pass.

Although the confident Munster outfit extended their lead through Niamh Carmody, Mayo came storming into contention with unanswered points by Tara Needham, Lisa Cafferky and Howley (two). Mayo remained in the frame as a result of traded scores between Ní Mhuircheartaigh and Sarah Mulvihill, but Kerry reinforced their authority when O’Shea fired home her second goal of the half in the 21st minute.

Further points followed for the Kingdom from Danielle O’Leary and Lynch, and while midfielder Sinead Cafferky posted a fine score for Mayo, it couldn’t prevent their opponents from bringing a convincing 3-6 to 0-8 cushion into the interval. Three points without reply from Aoife Geraghty, Howley and Needham initially gave Michael Moyles’ Connacht outfit cause for optimism, but a 0-3 haul by Corca Dhuibhne sharpshooter Ní Mhuircheartaigh kept the scoreboard ticking over for the Kingdom.

Despite the determined Geraghty adding her second score of the third-quarter, Mayo suffered a further set-back when McCarthy added Kerry’s fourth goal on 43 minutes. Even though this proved to be their final score, the fact Mayo could only muster a point from Sinead Cafferky inside the closing-quarter ensured Kerry weren’t to be denied a spot in the forthcoming showpiece.