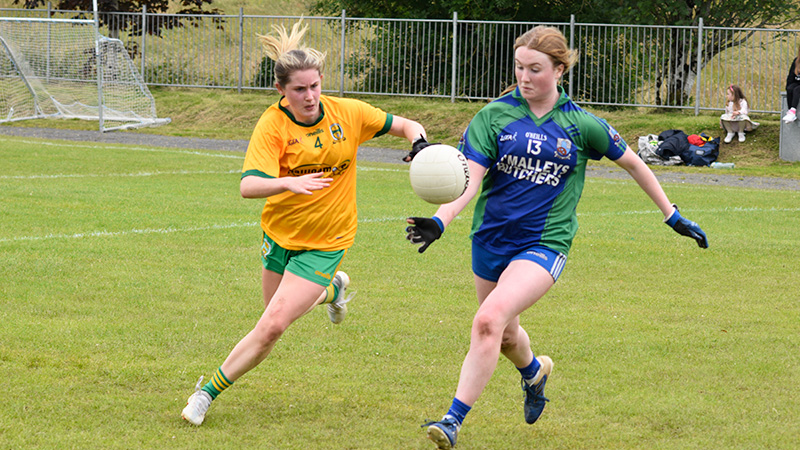 Theres almost a full round of games at all levels of the Ladies game this weekend with the two refixed first round games at senior level finally being played this weekend. A full set of Intermediate and Junior games will be decided too.

This is a big one for both sides. With Ballinamore's win over Kiltubrid and St. Joseph's defeat to them, the advantage is with Ballinamore.

A victory for the Ceannabo side would put them as favourites to progress to both finals, whilst a win for St. Joseph's would really open a whole load of possibilities heading into the last two games. Ballinamore have been very impressive in the championship so far and will go into this one as slight favourites.

St. Joseph's won't be any pushover however and there's a good chance they'll push Ballinamore far. Either way, this should be a close game.

St. Francis' victory over Dromahair likely ensures their survival at senior grade for the year but they'll want to build on that. Kiltubrid will pose a huge question mark for the Drumshanbo-Ballinaglera combination however.

Kiltubrid have Michelle and Emma Guckian in fine form up front while the Tighe sisters and Lauren Tivnan have helped provide a solid foundation for the Drumcong side.

Miranda Foley and Niamh McDonagh have been impressive in both goals so far this season. A great save from either netminder could determine this fixture, which has the added feature of essentially being a Senior B semi-final, as the winner would all but guarantee themselves a place in the final.

Mary's free scoring forwards have been very impressive thus far, helping the county town side rack up some large margins of victory. The threat of Sarah Reynolds, Aisling Leahy and Elise Bruen have sent the Carrick side to the top of the table.

Whilst the hosts will be favourites, Drumkeeran have had some impressive scorelines themselves. They ran St. Brigid's close before being awarded the win over Fenagh last week. They also looked good in the challenge match played in place of the Fenagh encounter.

Ella McNamara and Charlene Maguire were impressive, whilst Sarah Feeney and Shannon O'Grady also contributed around the middle of the field. Mary's will have to be more accurate than their last outing against Fenagh against improved opposition this weekend.

Mohill are looking to get their season up and running following their defeat to Carrick on the opening day. Much will depend on the availability of Dearbhaile Beirne, who provides so much for her side going forward.

Regardless, they should have enough to challenge an impressive St. Brigid's side. The experience of Deirdre Ward and Denise Stenson alongside the emerging Sarah Boyle give them a cutting edge going forward. Nicole Higgins at the back and Clodagh Tighe in goals are well able to hold down the fort.

In this one, Emma Quinn will be an outlet for the attacks against a county player filled Brigid's side. Among the county players are Síomha, Eimhin and Aisling Quinn, alongside the illustrious Maeve Quinn in goals. Some of the emerging talent from Aughnasheelin has also looked very good as they attempt to re-establish themselves as an LGFA force in the county.

Friday Night's curtain raiser for this weekend's action brings together Annaduff and Brigid's.

This promising yet raw side will be well matched with Annaduff, who have struggled to get going so far. A defeat to Leitrim Gaels last week will have damaged their confidence, so they'll be looking to the likes of Vivienne Egan and others for what is a young side.

The hosts absolutely need a win here if they're to catch Keeldra Gaels or Leitrim Gaels to keep their championship hopes alive.

This is an opportunity for both sides to leap to the top of the table. Glencar-Manor looked good with an opening round victory v Annaduff, which puts them in the surprising level of being a second team that can challenge at this level.

Keeldra Gaels on the other hand are favourites for the championship following their regrading from inter last season. They'll be expected to win here and should do with the experience of Alannah Ward, who put in a brilliant performance last week, racking up a large personal tally which saw her side to victory.

Both teams will be eager to show what they're capable of, given what they can achieve with a win.

To follow all of the games across finalwhistle.ie, click on the links above for live audio and/or text commentary.