Provincial Intermediate & Junior Championships Round Up 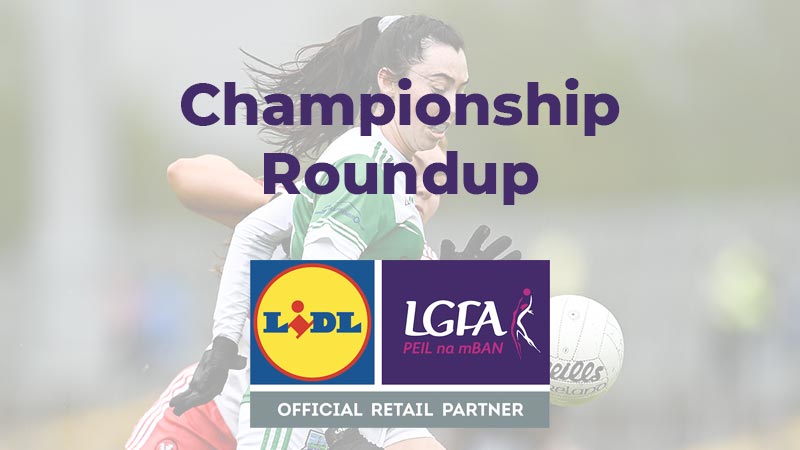 A busy weekend saw the Connacht and Leinster Intermediate championships complete their group stages with Semi Finals confirmed for the eastern province as Leitrim and Roscommon will now meet in the Connacht decider.

Fermanagh and Antrim will now meet again for the Ulster Junior crown after the Erne county overcame Derry.

Leitrim picked up their second win of the Connacht championship and in doing so booked their place in the final.

The reigning champions defeated Roscommon in their opening game but were beaten by Clare last weekend. They bounced back in superb fashion on Friday night. They were ahead by eight points at the break with two goals scored in the opening half.

Leitrim added 10 points to their tally in the second half with Sligo firing over seven. Corner-back Siobhan McCartan was sin-binned but it mattered little to Leitrim as they advanced to the final.

Despite losing their second game of the championship, Roscommon still booked their place in the Connacht Final; courtesy of their win against Sligo last weekend.

Clare were dominant for the majority of this game. With nine minutes gone on the clock they were ahead by four points. Roscommon tried to get back in but Clare were able to get scores and were ahead 0-09 to 0-03 at the break.

The lead was seven in the early exchanges of the second half. Roscommon cut the gap to four but Clare got their first goal midway through the half. Three minutes later they added a second goal. Roscommon ended the game scoring 1-03.

Kildare made it three wins from three in the Leinster Championship as they advanced to the last four of the competition. Rachel Sawyer got the game’s opening score but Kildare replied with a goal from Ellen Dowling. Roisin Forde added a second goal.

Carlow were back in the game minutes later when Sinead Hayden put away a penalty but the Lilywhites tagged on points to go in at the break seven points ahead.

Kildare continued to keep the scoreboard ticking after the break and got two quick fire goals to extend their lead to 15 points. Despite the scoreline Carlow kept battling hard but Kildare’s sharpness proved a huge advantage in this win.

Wexford came out on top in this winner takes all contest at Wexford Park. The win sees them book their place in the Leinster semi-final.

Wexford dominated the game from start to finish. They got their first goal inside the opening minute when Tara Doyle found the back of the net. They were seven up at half-time with Longford scoring just one point in that half; Michelle Farrell kicking over a free.

Just like the first half Wexford made the perfect start to the second half with Murphy getting her side’s second goal. Catriona Murray got Wexford’s third goal with 10 minutes gone in the half and she put away a penalty in the 55th minute. Farrell was Longford top scorer with four points (two frees) in what was a disappointing performance from the Midlanders.

Just the 10 goals scored here as Laois made it three wins from three and Wicklow bowed out of the championship on score difference.

Six goals were scored in the opening half; three each. The game had just started when Erone Fitzpatrick scored Laois’ first goal. Alana Havill scored a second for Laois as they held a seven point lead after six minutes. The lead was extended to 11 after 15 minutes but Wicklow got a goal through Niamh Cullen before Meadhbh Deeney tucked away a penalty minutes later. Emma Lawlor (Laois) and Laura Hogan (Wicklow) got goals as Laois were ahead by nine at half-time.

Neither side let up with the scoring in the second half. Anna Moore and Kelly O’Neill scored goals for Laois while Cullen and Deeney grabbed their second goal. Deeney putting away another penalty.

Louth picked up their first win of the championship and despite this loss Offaly are through to the semi-final courtesy of a better score difference over Wicklow.

Offaly were trailing by eight at the break and staged a fantastic comeback in the second half. Louth made the perfect start and had registered 1-01 on the board before Offaly opened the scoring. Louth added on two more goals to lead at the break 3-03 to 0-04.

Maire Byrne scored Offaly’s first goal just after the restart. With the clock ticking down Eve Kelly grabbed a second goal for Offaly before the calculators were taken out to see who joined Laois in the semi-final.

It was all too easy for Fermanagh as they advanced to an Ulster Final meeting with Antrim. Four goals were scored in the first half as Fermanagh were ahead by 13 points. Eimear Smyth and Sarah Britton with a brace of goals.

Brenda Brennan, Smyth and Britton got the goals for the Erne County in that opening half. Derry just couldn’t compete with them and struggled to contain a potent Fermanagh attack.