Antrim and Fermanagh must meet again in Junior final. 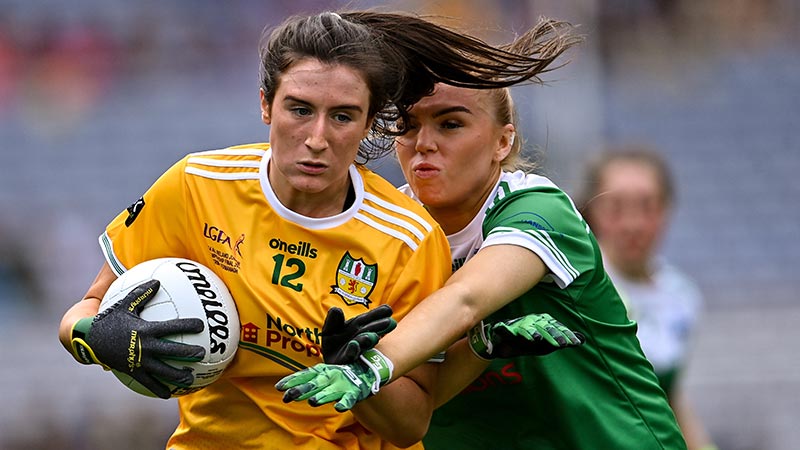 Orlaith Prenter earned her Antrim side a draw after an exciting TG4 All-Ireland Ladies Junior Final at Croke Park.

Fermanagh had come from four points down to go ahead in the 58th minute through Eimear Smyth but a pointed free from Prenter right at the end meant the sides must do it all again.

Antrim made a slow start but when they got into the game their potent full-forward line put Fermanagh’s defence under pressure. Blaithin Bogue was excellent for Fermanagh throughout but was sin binned near end.

Eimear Smyth scored a penalty in the 49th minute to bring her side back into the game and it made for a grandstand finish. They didn’t disappoint.

Fermanagh kicked over the game’s first two points. Antrim then got in their stride and kicked over four points in a row. Points from Aine Tubridy, Orlaith Prenter (2) and Grainne McLaughlin gave them a two point lead in the 11th minute.

Lara Dahunsi had a goal chance one minute later for the Saffrons. After going 11 minutes without a score Fermanagh got their third point in the 14th minute when Blaithin Bogue hit over a fine score.

An excellent finish from Maria O’Neill in the 17th minute extended Antrim’s lead to four points. Bogue was fantastic for her side and kicked over three points before the break while a point from captain Cathy Carey in the 28th minute gave Antrim a three point lead at half-time 1-07 to 0-07.

Antrim were reduced to 14 players in the 32nd minute when Niamh McIntosh was sin binned. Eimear Smyth’s free appeared to be tipped into the net by Bogue but it was ruled out for square ball.

Despite their numerical disadvantage Antrim went four points ahead in the 40th minute when McLaughlin kicked over a free.

O’Neill had a chance to grab her and her side’s second goal in the 44th minute; Prenter won possession and passed to O’Neill who was racing through but her powerful shot came off the post.

The Erne County were awarded a penalty in the 49th minute when Bogue was fouled; it looked outside the area; put it away to cut the gap to one. Fermanagh substitute Erin Tierney levelled the game for only the second time in the 54th minute. But there was time for late drama.