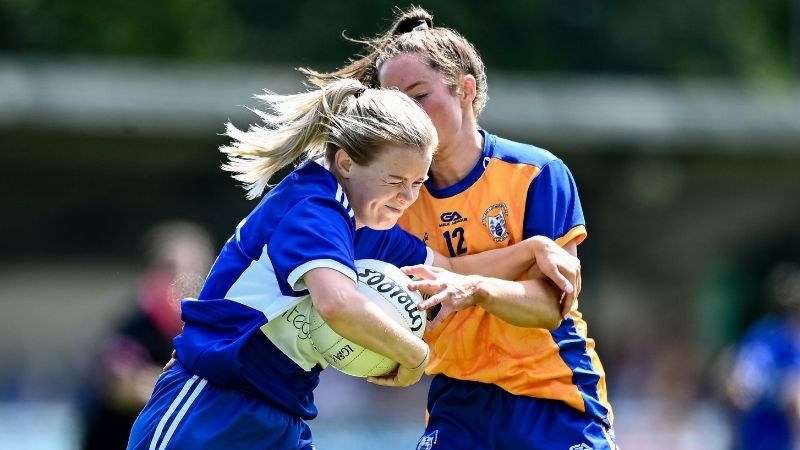 Mo Nerney scored 1-14 and Laois found a second wind in extra time in Kiltoom to qualify for the TG4 All-Ireland Intermediate Final at Clare’s expense.

The teams were level, 2-14 to 2-14, at the end of normal time before Clare hit four points through Cliodhna Blake, Fidelma Marrinan (two) and Catriona Callanan. But after Clare’s captain Orla Devitt left the field injured, two Nerney points reduced the deficit to two at the change of ends.

And within three minutes of the restart, she hit three more to put Laois 2-19 to 2-18 ahead. Marrinan levelled but the momentum was with the Leinster outfit. Erone Fitzpatrick scored and another Nerney free helped them into their first intermediate decider since 1998.

The game started frantically with two Nerney points giving Laois a 0-2 to 0-1 lead inside 90 seconds. Marrinan hit the Clare response but they were two up 60 seconds later when Roisin Considine found the net.

Eimear Barry produced two saves for the O’Moore county while at the other end Nerney (three), Jane Moore and Emma Lawlor made it 0-7 to 1-3, with Marrinan and Grainne Nolan responding.

Marrinan and Chloe Moloney overturned the deficit before Laura Marie Maher equalised but Eva Galvin’s goal on 22 minutes put Laois 1-8 to 1-5 up. But after a Moloney penalty miss, Amy Sexton capitalised on a poor kick-out to get Clare’s second goal and it was 2-5 to 1-8 at half-time.

Nerney struck Laois’ second goal straight after the restart before Galvin, Nerney and Erone Fitzpatrick put them 2-11 to 2-5 clear on 34 minutes. But after Considine and Nolan converted for Clare, Nerney and Fitzpatrick restored Laois’ six-point advantage entering the final quarter.

The Banner were struggling but finished strongly as Marrinan, Aisling Reidy, Considine and Niamh O’Dea brought it back to 2-13 to 2-12. Nerney put Laois two up but Ellie O’Gorman and Marrinan brought them back level at 2-14 to 2-14 at full-time.

Both teams started extra-time with 15 players despite yellow cards for Clare’s Emma McMahon and Laois’ Clodagh Dunne. However even though Clare went four clear, Laois turned it around with a miracle recovery, led by Nerney.