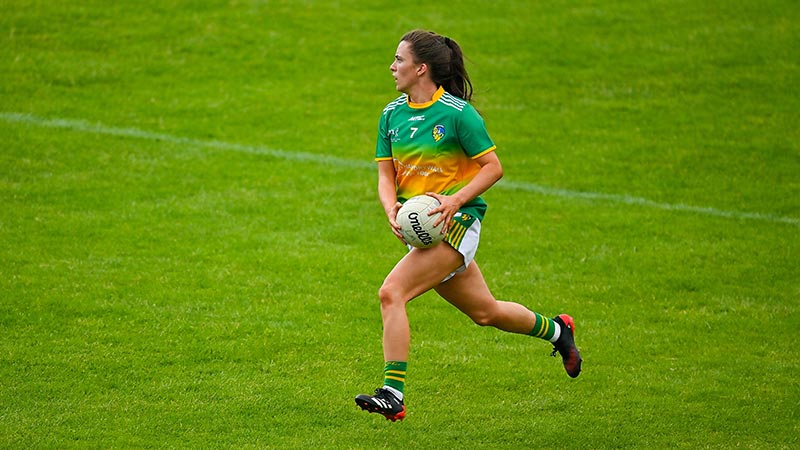 Leitrim started their Lidl Ladies National Football League Division 4 campaign with a Michelle Guckian inspired display to a 4-18 to 1-06 victory over Fermanagh in Ballinamore this afternoon.

Leitrim's forwards were just too powerful on the day for their northern neighbours in poor conditions, as the sides who were only separated by a single point in last year's All-Ireland Intermediate championship were poles apart in this encounter.

Michelle Guckian who finished with 1-7 to her credit before her withdrawal mid way through the second half was the main target for the green and gold side. It wasn't a one woman show though as she was ably assisted by a fantastic group around her, debutant Sarah Reynolds getting her senior inter county career with a goal with her very first attack.

A harsh sinbin for lively Fermanagh centre forward Blaithin Bogue after twenty minutes was probably the end of the game as a contest, although Leitrim had already opened a healthy eight point lead at that stage. Fermanagh just never really recovered and looked a broken side long before the end of the game. Missing a large proportion of last year's squad they will need some steel added to compete in the Intermediate Championship again later in the season.

Just before the break Leitrim's best goal of the game arrived with a fantastic piece of inter play involving Guckian saw Roisin Fowley find the net to effectively finish the contest opening a fourteen point lead that Leitrim never looked like loosing hold off at any stage.

Leitrim Manager Hugh Donnelly will be happy with his side's performance level and the opportunity to get a look at all 30 members of his panel as he took full advantage of the rolling substitutes to bring every player into the fray, a number of them for the first time.

Fermanagh did rally well at the death and a goal from Blaithin Bogue and two points from Eimear Smyth in injury time put a slightly nicer look on the scoreline from the northerners point of view. Elaine Maguire had been impressive for the northerners in the first half but didn't feature in the second half of the game. Brenda Bannon also stood out for the Erne county.