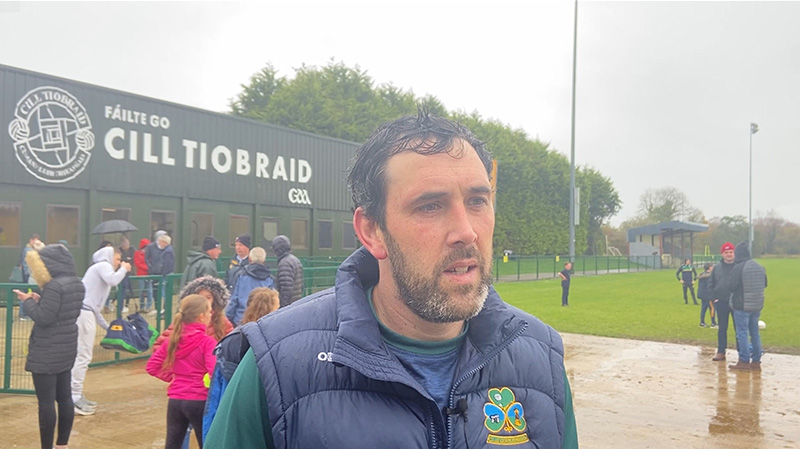 Age is but a number for Cathal Quinn, as he put in a man of the match display to see Gortletteragh victorious in the Leitrim Junior B Football Final, the win he feels will give a boost to the younger players in the team.

Speaking to FinalWhistle.ie after their victory on Monday, Quinn was delighted to see his team record some silverware, despite the terrible weather he was happy to win a title with his friends and teammates.

“It’s lovely, yeah twas great now for all the lads all the players who took part, support a big crowd here even in the bad weather and stuff like, it’s lovely to win anything at any level when your playing sport with your friends like so, we will enjoy this one.”

Conditions made for greasy ball and a slippery surface, but as Quinn says the Kiltubrid surface held up well, but their style of play and a rub of the green was key to their goal scoring exploits.

“Despite all the rain and the weather the way it’s been like the pitch was in very good condition like, there was not too many people losing their feet but it was lads were hungry for it today and their work and the vision of passing and stuff just worked out for us today we got the rub if the green and it’s probably why the goals came so handy you know.”

Quinn now in his 40’s showed great leadership in all areas of the field to take home the man of the match award, while he was delighted to have been selected to take home the award, he believes there were numerous players in Gortletteragh colours that deserved it.

“Very chuffed with that now wasn’t expecting it at all there was probably 20 lads out there that could have got their pick at it today, because everyone played well so they did on the Gortletteragh team so no I am I’m very happy with it.”

“It should do well for the young lads that’s after coming up like, because we had a tough run at Senior Championship and the league as well, but we had eight new lads coming through probably a few injuries at the start of the year didn’t help but this should give them a pickup, they’ve a good year under their belt and winning a bit of silverware too will always help give a whole lot of boost to the young lads coming on so, I think the future will be good enough for Gortletteragh now them lads stick together it’ll be bright.”