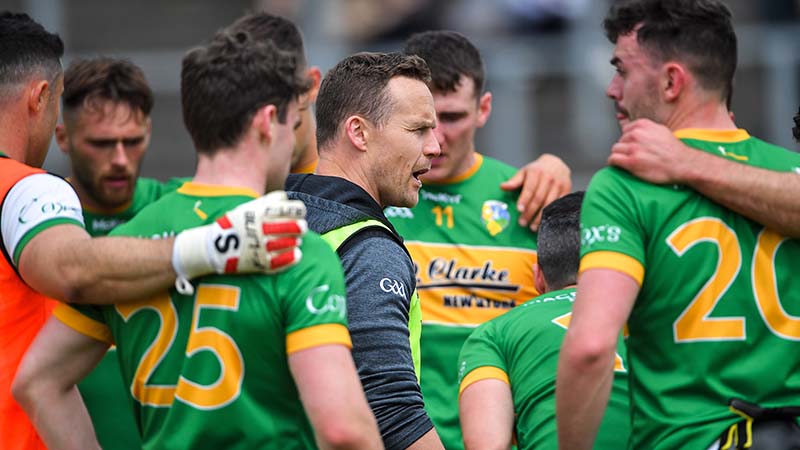 Leitrim Senior Football Manager Andy Moran has confirmed the departures and newcomers to the Leitrim panel for next season, along with some changes to his backroom staff as they prepare during busy off season.

Speaking to the FinalWhistle.ie Leitrim GAA Podcast this week, Moran spoke about the changes to the panel and backroom staff as they look to build on the growth shown this year, 12 months on from his appointment Moran is not putting the feet up and relaxing during the winter break, but has looked back fondly on his first term as manager of Leitrim and that his job is to continue showing the Leitrim people what the team are capable of.

“In fairness to the players, they’ve been superb in terms of everything they’ve done, so we got knocked out the first week of June it was a hard defeat because we didn’t get to play in Croke Park, I think the joy and the buzz around the place after the game was clear there for everyone to see that people were now getting behind this team.

I think the players got a good energy off that, off them two games the Antrim the Sligo game, even the Galway game, which feels funny but the first 20 minutes gave people a bit of hope and then the London game so we got a lovely kind of energy off that and the players have responded well too it and they’ve worked throughout the summer to be honest with you, not in group collective sessions or anything like that but I’ve often said about the importance of Daithi McCabe and Aidan Creamer them guys have got fellas going.

They’ve got fellas on programs, they’ve got them working and the change and difference in the guys has been huge so my job as a manager of that is just making sure that that’s implemented, make sure that the right people are on the bus in terms of the backroom team the energy that they bring and just kinda keep the thing going.”

Change was always going to be on the cards in the management panel as James Glancy left to join the Longford set up, it was also speculated that Mike Solan would head back to Mayo to fill their vacant managerial seat but he remains as part of Moran’s team for next year, there is a new coach joining the team but some change has also occurred in the Physio and Sports Psychology departments ahead of 2023.

“We’ve got a coach in called Luke Bree, who’s at Sligo originally but would have a massive alignment with St Vincents club in Dublin, where he spent his last ten years won an All Ireland club title with them, but he’s back in Sligo and he was Roscommon coach last year and he became available around the same time that James left, we met him had really good feedback about him met him and he’s been a huge addition to our group so far so we’re absolutely delighted with him.

Obviously Eanna Madden has replaced Shane Bohan as Physio, Shane has been an unbelievable servant to Leitrim in terms of the amount of work he’s put in, mixing a busy family life with a busy work life and also to do Leitrim was just an amazing effort, listen we were delighted to have Shane and when Shane stepped away, Eanna’s came in and has been brilliant there as well obviously everyone knows Eanna being an International sprinter, there’s not too many of them around Leitrim and an international rugby sevens player so he’s a real high profile addition to our group and he’s been a really good addition so far and hopefully that kinda keeps going.

In the Sport’s psychology route Kieran Shannon who’s a really good friend of mine, came in helped us out last year but again work commitments, location, everything just wasn’t suiting so we had a conversation Kieran stepped away and Sarah Healy now is in replacing Kieran Shannon.”

One of the biggest questions that many will be asking is just who and who wont be donning the Leitrim jersey next year, David Bruen is a high profile departure from the Leitrim camp as the captain heads down under for the year, some players are out with injury while others join Bruen in moving over seas Moran has confirmed.

“I think David being the captain was probably the most high profile, he applied for the Visa before Covid and to my unfortunate in August he informed me that it literally just pinged into his email the visa just came to him in August, so he said he had to take that opportunity and I respected him for it, absolutely no regrets making David captain last year when we came in he was the guy who was the professional person around the place himself and Donal Wrynn they did a great job for us as captaincy.

Of course we’d loved to have held onto David but he decided to go for the year, I just respect him for that people need to live their lives as well, he was a brilliant guy for us around the place in our first year huge physical conditioning brilliant in the gym and just carried everything that we needed to do and in year one he just did a great job for us no regrets on that even though he left we’ve no regrets on that.”

“A few other guys left, the way the county board described it to me is that we’d always have three a year that it’d leave but we had three years to cover, so a few of the guys took of, Dean (McGovern) left, Oisin McCaffrey left, Conor Dolan just left the panel because injury and bits and pieces, obviously Conor Cullen sustained a really bad injury testament to Aughnasheelin that they did so well without him, really bad injury during the year so that’ll probably put him out for 12 months, Ciaran Cullen is going to Australia, Aaron Hoare was supposed to be going so we’re still waiting from Aaron so we’ll see what the big man comes to it and Benny (Brendan) Flynn has left the squad as well.”

While the door closes for the time being for some lads in the panel, it has given the opportunity for some new faces to comer in and impress during the on going off season prep work, Moran spend a lot of time during the Championship season to watch and scout players playing for their clubs, with a host making the cut for a chance at making the panel, with Aidan Flynn a big name coming back into the squad.

“We’re super excited about Killian Gaffey, ex Sligo Rovers Carrick-On-Shannon not many people would know him but a hugely talented keeper, unfortunately just coming back from injury with his cruciate but we’ve got him back on the pitch and he hopefully will be a star for Leitrim in the future, Barry McNulty a really exciting player, we seen him throughout the club championship, I remember the first day I seen him I went down to watch Ballinamore V Manor in a rearranged games down in Ballinamore.

We didn’t know who this young guy was, Barry McWeeney even mixed him up, my encyclopaedia of Leitrim football, after awhile we quickly discovered who this guy was and from that moment on we’ve had an eye, so he’ll play U20 this year but he’ll also be part of the Senior squad, he’s a fresher scholarship in UCD a really exciting player.

We’ve Radek (Oberwan) from Drumshanbo Allen Gaels, Diarmuid Kelleher from Carrick outstanding throughout the club championship, we’ve Michael McKiernan from Ballinamore, we’ve Eoghan Shanley from Ballinamore and we’ve Aidan Flynn from Leitrim Gaels, who since he’s came back into training has been a huge huge addition to our squad, again I seen him playing Manorhamilton marking young McNulty down the first round of the championship, after that came we tried our best to get Aidan but it just didn’t work last year to get him in but after that game it was just so obvious that he can play at that higher level so we went after him and we’re happy to say he’s came back in.

And then just two young guys we are offering a time for them to kinda impress is Stephen McLoughlin and Adam Reynolds, them two guys are in with us at the minute, they are training and they’re just going to try and show us what they have over the next month and we’’ll make an assessment on the guys in December.”

Andy Moran also spoke about the goals for 2023 along with the Leitrim Contingent lining out for Sigerson Cup check out those videos below: