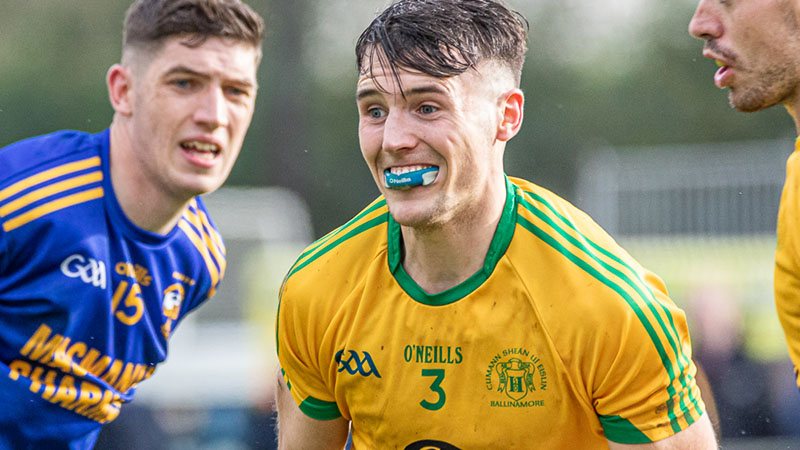 There’s a couple of heavyweight bouts in the second week of the Connacht Gold Leitrim Senior Football Championship this week as teams look to put one foot in the quarter and semi finals of the competition.

This will be Leitrim Gaels’ first home championship game of the season as they once again face North Leitrim opposition in the form of Dromahair in Leitrim Village.

They’ll be hoping to build on their good form from last week, when they defeated Glencar / Manor. Dromahair on the other hand will be seeking to improve on their defeat at the hands of Ballinamore Sean O’Heslins.

Dromahair, just up from Intermediate football, can pose a danger at this level thanks to Jamie Conlon’s authority at centre back and the accuracy of Martin Feeney when taking scores. Leitrim Gaels however should have the firepower, with the playmaking ability of David Bruen, Donal Casey and Shaun Chandler as seen last weekend, Colm Moreton’s physicality in midfield behind a goal hungry forward division, to ensure their second win of the campaign.

This is a meeting of two well acquainted neighbouring sides, having faced each other a number of times already this year. If history has taught us anything, it’s that to expect a tight affair.

On paper, this looks like a straight shootout between two of Leitrim’s most prolific forwards in Ryan O’Rourke and Keith Beirne. In reality, each side possesses some of the best talent in the county.

Jack Gilheany, Conor Dwyer, Mark Keegan, Donal Wrynn and Riordan O’Rourke will all play a crucial role for Fenagh. Mohill will be looking at their cohort of inter-county players for inspiration.

Players such as Jordan Reynolds, who made his senior debut for Leitrim in the Tailteann Cup and is usually a thorn is most defence’s side, will likely have a say in how this goes. As well as Reynolds, James Mitchell, Shane Quinn and Oisin Madden, who jojned Beirne in last weeks team of the week, will all look to keep their good form up.

This will be a clash of two of the heavyweight’s in the senior championship, as defending champions Ballinamore welcome the always ambitious St Mary’s.

This is a rematch of last years semi-final, in which Ballinamore won comfortably. Obviously, Mary’s will be looking to show that they have improved since then and that they can hang with the best of them.

The Carrick side are fresh off a loss to Mohill last week, having been handed a particularly tough draw. Facing both of last seasons finalists in the opening two games is less than ideal for any team to start.

This could be a good omen however, as last time they lost their opening two games of the championship they ended up making the final. Only time will tell to see if history repeats itself however.

As for the players, Paul Moran could have a big say for the hosts. He’ll be well aware that this is a sterner challenge than their opening game against Dromahair.

No matter what, this should be a good game.

Two teams who find themselves as outside contenders for this years championship square off in this one. Despite the tag, Gortletteragh got off to a really good start with a win away to Melvin Gaels last week.

Glencar Manor on the other really pushed Leitrim Gaels on opening weekend and ended up being unlucky not to get a draw. Despite the good performaces, this is already a must win for both sides.

A loss for the visitors would put them in trouble of not reaching the quarter finals. Gortletteragh on the other hand would put one foot into the quarters should they win.

Keoghan McGovern was impressive from open play last week, being accurate as ever. Jamie Quinn also featured with an impressive cameo from the bench, scoring three points. Quinn is likely a contender to start this week as a result. Francis Flynn will also be expected to be reliable from frees.

For the visitors, Evan Sweeney will look to build on an impressive performance from last week. Joining him in attack will be Donnacha Devaney and Niall Brady, coming off good games last week themselves.

Elsewhere, James Rooney played well in last weeks defeat and will be an important cog in the machine this week.

Melvin Gaels will be hoping to put things right after they fell by just a single point to Gortletteragh last week, mostly due to their own ill discipline. This could be a costly result when it comes to deciding whether or not they’ll be in the quarter finals or facing the threat of relegation.

Despite last week’s loss to Fenagh, Aughawillan will be confident of taking two points from this one. This is an experienced squad, with the bulk of the squad having won three championships in the last ten years.

Melvin Gaels do have flashes of quality in this young team, but are already hampered due to suspension thanks to two red cards last week. However, if they keep their heads then there’s a chance they can upset the favourites.