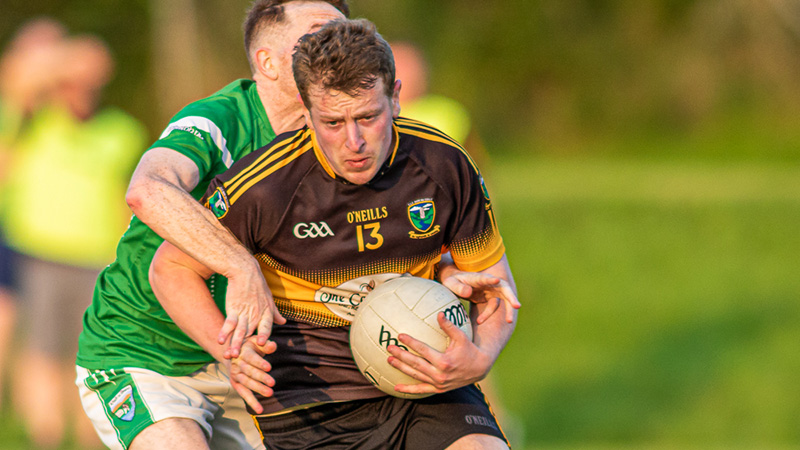 The group stage of the Leitrim IFC concludes on Sunday evening, with the contestants knowing after this week whether they’ll be looking at the promotion or relegation series for the concluding stages of the Smith Monumentals Intermediate Football Championship.

This is the matchup that will likely draw the most attention this week as both sides have been very impressive in the championship so far. The hosts have a 100% winning record this season whilst Allen Gaels have looked very strong in their own right.

The Gaels have found themselves being heavily tipped for the inter title and it’s due to their young talent. Caleb Duffy and Radek Oberwan in particular have stood out.

A victory for the visitors will see them almost certainly guarantee a semi-final spot, whilst Aughnasheelin are looking to continue their fine form. They have a spotless record to maintain and a victory would guarantee them a semi, although they almost have that wrapped up no matter what.

Mohill have struggled since their promotion from junior and Annaduff will definitely enter this one as favourites, even without their county star Conor Reynolds. Mohill will be effected by their A team’s senior match on Saturday, so Annaduff should have the strength in depth to see them aside.

At least one or two of Mohill’s regulars will be unavailable, so Annaduff will look to the experience of the spine of their team. Dillon Keane and Hugh Moylan at full and centre back respectively are the key players in particular .

Victory for the hosts as well an Allen Gaels loss will see them leapfrog the Gaels into a semi-final spot. If they manage to win by 14 points, then they go into the semis regardless, so expect them to throw the kitchen sink at it here.

Bornacoola enter this one with a semi final in the back of their minds. Their negative goal difference however is a massive obstacle and they will require both Allen Gaels and Annaduff to slip up in order to get there.

Aughavas have struggled, although that is down to player unavailability rather than poor performances. Whether it’s been injuries or personal circumstances, they’ve just had little luck in that department.

It will be tough for the visitors nonetheless. They’re virtually guaranteed a quarters spot, but a loss along with enough results against them would see them drop into the relegation playoffs. Given the stakes, they’ll look for the win first and foremost, whilst hoping the semi final with a bit of luck.

The hosts on the other hand cannot mathematically make the quarters as the four teams above them play each other. No matter what, a relegation playoff awaits, so they’ll be hoping for a confidence booster.

In terms of performances, Kiltubird have been a mixed bag. They’ve produced a fantastic victory over Allen Gaels, but suffered defeat to Bornacoola. The semi finals is a slight possibility, but highly unlikely.

Ballinaglera will have hopes of sneaking into a quarter final spot, but must win to do so. That result would mean Kiltubrid miss out on the quarters, but that’s not to be expected.

For the visitors to make the semis, they need a huge scoreline here whilst hoping Bornacoola, Annaduff and Allen Gaels all slip up. For Ballinaglera to make the quarters, they’ll be hoping their forwards in Wayne Reynolds and the Maguires produce.

Drumkeeran have misfired through much of this championship but have found themselves in a position where avoiding defeat will guarantee them a quarter final spot.

They’ll have to beat a defiant Drumreilly side who are looking to play a quarter final after this week rather than a relegation playoff. With similar stakes for both sides, this should be an intense match.

The hosts will look to the experience of Colm Clarke and Cathal McAuley, who should be enough to tip the scales in their favour. Drumreilly have a never say die attitude however and simply don’t know when they’re beaten.

You can find live text and audio commentary for each match on finalwhistle.ie/live through the respective links above.