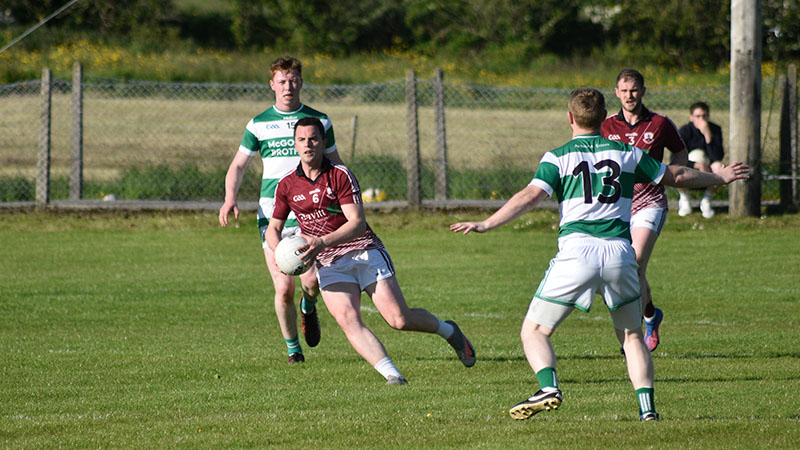 It’s a big weekend for all the teams in the Smith Monumental Intermediate Championship as they enter Round 3, with some teams on the fringes of qualification for the quarter finals whilst others will find out that they’re facing relegation.

Both of these championship contenders had big wins in Round 1, but were knocked down a peg or two the following week. Annaduff saw out a tight victory over Ballinaglera, whilst Allen Gaels were defeated by a last minute penalty to neighbours Kiltubrid.

Neither side will be happy with the draw pitting them against one another and Allen Gaels will need the victory to reignite their chances of making the semi final directly. Otherwise, a potential banana sking awaits in the draw for the final round.

Annaduff will be looking to continue their fine form so far, despite a few injuries, with a win going a long way to securing a semi final place. Their growing injury list could do with the added rest. Due to the stakes involved, this is probably the game of the weekend.

This is essentially a knockout clash for both sides, with a win securing a quarter final spot whilst a loss would put either one at risk of relegation.

Both of these teams have had impressive victories so far. Bornacoola defeated Kiltubrid on the opening day whilst Ballinaglera ran up a big score against Mohill’s reserves.

Bornacoola have been heavily reliant on the quality of Cian Mallon, Damien Moran & Ronan Mulligan so far whilst Ballinaglera have gotten excellent scores from impressive forward play across the whole unit.

This should be a shootout, but Ballinaglera will be favorites to grab the win. Bornacoola are resilient however and shouldn’t be written off, given they’re fighting for their intermediate survival.

Mal Guckian’s charges surprised most observers with a victory against Aughavas in the last round of the championship. With that win, they’ve given themselves a fighting chances of reaching the quarter finals.

Aughnasheelin however will be a tough task given how impressive they’ve been in both the league and championship. Despite the loss of Conor Cullen, they’ve shown they have talent on every line of the pitch.

A few early scores for Aughnasheelin would likely see them to a comfortable victory, but Drumreilly’s never say die attitude will be an obstacle to overcome. They have enough experience and firepower to keep them competitive.

Both sides got their first wins of the campaign last weekend. Kiltubrid with a very impressive comeback victory against rivals Allen Gaels thanks to a last gasp penalty from Kealan McKeon, whilst Drumkeerin came out on top after a tight affair with Mohill.

This was unexpected but Drumkeerin will need to improve if they are to get a win in this one. They have under-performed given their expectations prior to the season, which can also be said for Kiltubrid.

Both sides are too strong for a relegation battle but will need a win to avoid being dragged into one. Whoever loses this one will be disappointed with how the season has gone.

Aughavas make the sort trip to Mohill for the final game of the round. Both sides are awaiting their first points in the championship this year, which is made all the more interesting by Liam Higgins’ presence in the Aughavas dugout.

Higgins will be hoping for a win against his own club so Aughavas can get their campaign up and running. The visitors can beat anyone on their day, but have just struggled so far. A win is a must if they are to progress to the quarter finals.

Mohill in their first year at this grade were always going to struggle, given they are a second team. They probably haven’t reached their own expectations in terms of results so far however, although last weeks performance against Drumkeerin was encouraging.

Aughavas will enter as favourites but they’ll be doing well to reach the knockouts at this point. It’s not impossible to think we’ll see each of these teams play each other in a relegation series in a couple of weeks time.

Live audio commentary of all games can be found on www.finalwhistle.ie/live – Links to each game can be found above.