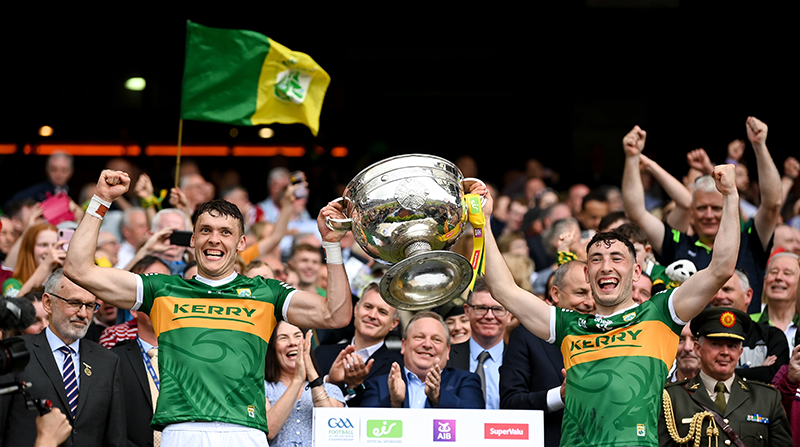 Kerry have seven winners in the PwC All-Stars for football in 2022, the League and All Ireland Champions had 12 nominees selected for the prestigious honours.

The breakdown of winners comes from the four sides to contest the semi-finals, while all provincial winners have a winner also, seven for Kerry, five for Connacht champions and beaten All-Ireland finalists Galway, two for Ulster champions Derry and one for Leinster champions Dublin.

Amongst the 15 winners, 11 have received their first All Star award as the star-studded line-up packs the best footballing talent to contest Sam Maguire this year.

Having won his first senior All-Ireland medal this summer, Kerry forward David Clifford picks up his fourth All-Star award, with his brother Paudie again joining him and collecting his second. David is also a contender for Footballer of the Year.

Sean O’Shea also adds a second All-Star to the mantlepiece, while in a year of first time All Ireland winners from the Kingdom, Shane Ryan, Jason Foley, Gavin White and Tadhg Morley all pick up an inaugural award. Morley brining the first All-Star back to Templenoe since Tom Spillane in 1987.

Galway have their largest representation in the All-Star list since 2001, five first-time winners in defenders Liam Silke and John Daly, midfielder Cillian McDaid and forwards Shane Walsh and Damien Comer.

Comer and Walsh missed out narrowly in 2018 when Galway reached the League final and All-Ireland semi-final, losing both times to Dublin.

McDaid had a sensational season in midfield for Galway, hitting four points in the All-Ireland final against Kerry and scoring the winning goal in extra-time of the quarter-final victory over Armagh. He is named as one of the best midfielders this year, deserving the award with countless big game performances for the Tribesmen.

Corofin All-Ireland winner Silke is regarded as one of the best defenders in the country, his man marking is superb and is rewarded with a place in the defence.

The list of father and son winners has another name to be added to the list, Galway defender Daly following in the footsteps of his father Val who was honoured for the Tribesmen in the 1987 and 1990 seasons. Comer becomes the first player since Tom Naughton in 1974, to claim an All-Star for Annaghdown.

In a long history for one of the countries most prestigious GAA clubs, Derry veteran Chrissy McKaigue is included in the defence and becomes Slaughtneil’s first ever All-Star winner in their history.

He is joined by Connor Glass as the two nominees to hail from Ulster. Both played huge roles in Derry winning the Ulster decider and making the semi-final stage, as they are amongst the first time winners.

Derry’s last All-Stars were Kevin McCloy and Paddy Bradley, both awarded honours back in 2007, Glass joins fellow Glen winner from the Derry 1993 All-Ireland winning side Enda Gormley in brining an All-Star back to his club.

Glass was Derry’s midfield maestro this year, operating alongside plenty of other high-quality midfield partners including Brendan Rogers, Gareth McKinless and his clubmate Emmett Bradley.

In a year of Transition for Dublin, Ciaran Kilkenny who equalled Stephen Cluxton’s record of six All Stars to come from the Dubs, picks up the last award. A stalwart in blue he became dependable and was always consistent despite Dublin’s run of six All-Irelands in a row coming to an end.

Amongst those not to receive an award, Armagh’s Rian O’Neill was the catalyst for Armagh this year, his long range free against Galway was majestic to watch, while teammate Ethan Rafferty who like Shane Ryan has played outfield misses out after some great individual performances notably scoring two points against Tyrone.

Brendan Rodgers another man from the Sluaghtneill club was a star for Derry alongside Glass this year, named as the player of the championship in Ulster, he misses out on being selected having had stand out showings in midfield and defence.

Another defender to miss out is Kerry’s Tom O’Sullivan, he had a great season until Shane Walsh tormented the Dingle club man in the All-Ireland Final, the competition for defenders this year like their forward counterparts has been tough to leave one out over the other.