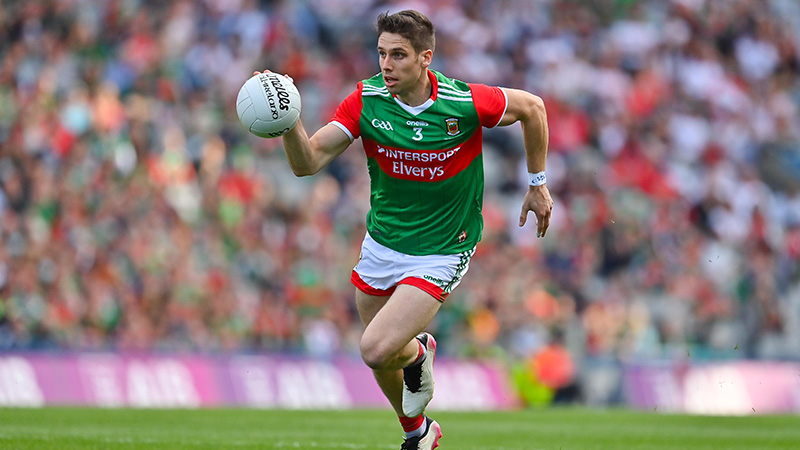 Mayo defender Lee Keegan has announced his retirement from Inter-County Football, bringing an end to his eleven year career in the Mayo jersey.

Keegan is fifth on the list of Mayo’s all time appearance list having made a total of 140 appearances during his career in the West, notching 8-71 as he epitomised the role of an attacking half back.

The Westport native won five All-Stars, seven Connacht titles while he also has an Allianz Football League medal from 2019, named as Footballer of the Year in 2016 he was nominated for the award in 2013 and 2021.

Sam Maguire glory would be one that he would never manage in his incredible career, losing six finals in all, but served as a great role model for younger players to look up to and will be one of the all time great defenders the country has ever produced.

With the start of the Allianz League right around the corner the news is a blow for Mayo Manager Kevin McStay as he would have hoped the 33 year old would have stayed on to bring leadership and his overall quality to the setup this season.

Following the news McStay released a statement praising Keegan for his hard work over the years.

“Lee has represented Mayo with great distinction. He was indestructible and defiant: on the biggest days, he walked tall and proud. Lee embodied the resilience of Mayo. The example he set will continue to inspire Mayo for many years to come.”

Family reasons have seen Keegan bring the curtain down on his playing career with Mayo, a young family has meant that he can no longer commit full time to playing in a role he helped transition into the modern day, but will still line out for club duties.

Keegan released the following statement having announced his decision to retire.

“I have enjoyed every minute of my time with Mayo. We had great days and some memorable victories. For me, it was always about wearing that Mayo jersey with pride every single day, and I was honoured to play alongside players who were of the same mind, and under managers who drove high standards on and off the pitch.

But all good things must come to an end. The reality is that I have had to rely on a lot of people – most notably my wife Aoife – to give me the time and space to pursue my dream. Now that we have two young children, Lile and Rhea, I am keenly aware that I am no longer able to commit to inter-county football in the way I did over the past eleven years.

I will continue to make myself available to Westport and look forward to building on last year’s historic success in the years ahead.

I wish Mayo every success in 2023 and beyond. I will be cheering them on from the terraces. That’ll be an unusual experience for me, I’m sure, but such is the way of life.”

A defender known for his scoring and tough tackling, his battles with forwards are documented the length and breath of the country, those finals with Dublin are legendary despite never having the moment in the sunshine of climbing the Hogan Stand and lifting the biggest prize the sport has to offer, it will not define a career that made him one of the best in the business.