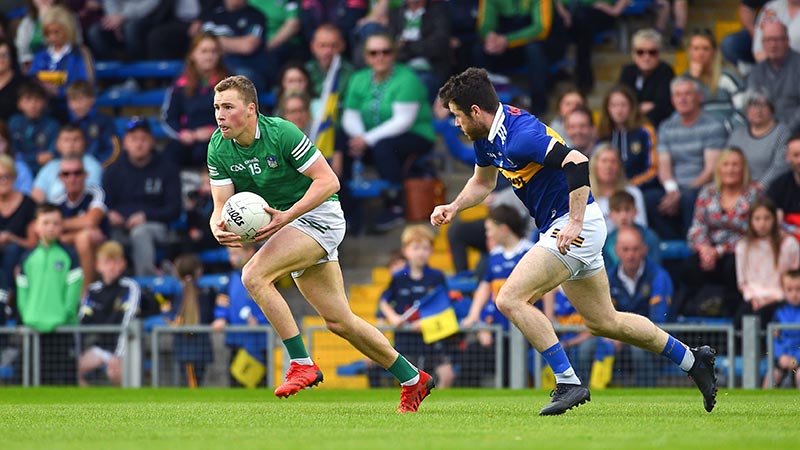 Limerick will face Kerry in the 2022 Munster Senior Football Final, after defeating Tipperary 2-10 to 0-10 this evening in Thurles.

Goals in either half ensured Limerick make their first final in 12 years, despite the free taking of Jack Kennedy for Tipperary, it was the goals that became the deciding factor.

Cillian Fahy with an exhibition in midfield for the Shannonsiders, as their fairy tale year continues into the provincial decider.

It was a slow burning opening half in Thurles, as both teams could barely be separated on the scoreboard and also on the field at times, the big score coming when Josh Ryan found the net after 12 minutes, but Jack Kennedy and Sean O’Connor helped to drag them over the line and keep them in touch with Limerick.

Fahy started the tie with intent as he pointed within the opening minute, a very possession based opening to the half, Kennedy levelled after four minutes before O’Connor kicked them ahead after ten minutes.

After Ryan had found the net, thanks to a rebound that fell kindly onto his boot, they started to get some breathing room, Fahy on the board for a 1-2 to 0-2 lead after 12 minutes.

Tipp replied well through Kennedy and O’Connor both adding their second points of the game, before Mark Russell drew the sides level after 28 minutes.

Scores were hard to come by as we waited large spells before the umpires were called into action, Hugh Bourke put Limerick ahead on the half hour mark a first score for 18 minutes, but deep into added time Shane O’Connell levelled the game for the third time, as they went the interval with the scoreboard reading Tipperary 0-6 Limerick 1-3.

Into the second half the men in green started to lay down the marker seeing them into the final, Brian Donovan raising the green flag which kept them comfortably ahead, as they picked off their scorers with Robbie Bourke, the man who starred against Clare, coming on to again bring vital scores.

Ryan and Adrian Enright signalled early intent that Limerick were in Thurles to win the tie, as they pointed for a two point lead just after the restart, but Sean O’Connell and the ever reliable Kennedy had them tied for the fourth time on the 50th minute mark, as Hugh Bourke missed his second goal chance minutes earlier.

Limerick hit the break before the hour mark with a great purple patch, Bourke had them a point ahead before O’Donovan struck to the net as the defence parted ahead of the forward to drive a shot into the net, Fahy would then add his third point minutes later, with Limerick ahead 2-7 to 0-8.

Kennedy finished the tie with 0-5, kicking two late points coming for a free and a 45’, but a black card for O’Connell saw a gap emerge in the Premier Counties backline, with the two Bourkes, Hugh and Robbie kicking late scores for a six point winning margin.