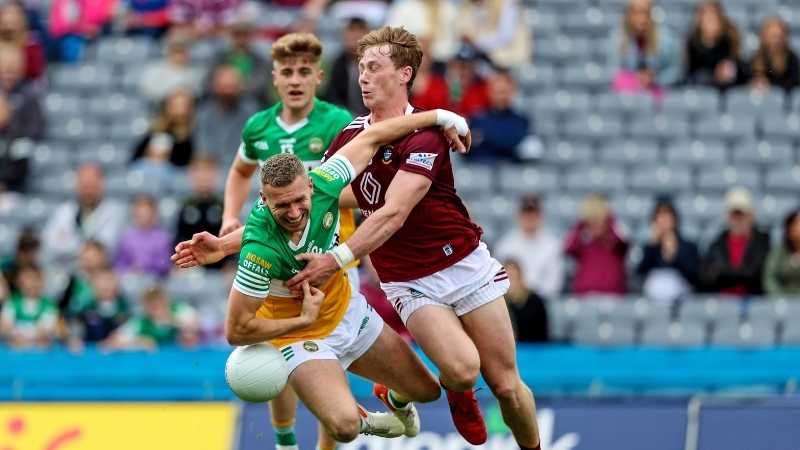 Westmeath booked their place in the first ever Tailteann Cup Final after a high scoring 3-22 to 2-16 win over Offaly in Croke Park today.

The Lake County men led throughout this game, as Jack Cooney’s side now face Cavan in the penultimate game of the new tournament.

From the very start of the match, Westmeath showed their class in abundance with their fast, free flowing attacks causing Offaly trouble. Points from John Heslin, Sam McCartan and Lorcan Dolan opened up an early four point lead for Westmeath before Ronan Wallace buried the ball home into the back of the net on the quarter of an hour mark.

Ronan O’Toole and Luke Loughlin’s pace was a huge advantage for their sides but Offaly did find their first score of the game after 16 minutes through Keith O’Neill who finished well to put the ball in the back of the net to reduce the deficit. Heslin and McNamee traded frees before Westmeath scored their second goal of the half, courtesy of a Lorcan Dolan strike from close range.

The battle between Offaly’s Jack Bryant and Westmeath’s Jack Smith was a thrilling one with both players leaving everything on the pitch.

Dylan Hyland and Anton Sullivan were major plusses for Offaly and their energy down the flanks did help their side create chances.

Niall McNamee, Jack Bryant and Anton Sullivan continued to keep Offaly’s tally ticking over but Ronan O’Toole, John Heslin, Luke Loughlin and James Dolan continued to show their sharp shooting and sent their side into the break, leading 2-11 to 1-6.

Westmeath came out emphatically for the second period and Ronan O’Toole found his side’s first score of the half after just over 15 seconds. Ray Connellan added another point, but Offaly did find some scores of their own through Keith O’Neill, Dylan Hyland and Niall McNamee.

The sides continued to fight for every ball and Offaly threw everything at Westmeath to try and get themselves back into the lead, but Lorcan Dolan’s second goal of the game put his side ten points up midway through the second half.

Cathal Flynn did score a second goal for Offaly and what a finish it was, as the substitute hit a rocket into the top corner. Westmeath showed resilience and great determination after this and it was substitutes of their own that continued to add scores until the final whistle with Robbie Forde and Alex Gardiner both showing their capabilities with scores from distance.

After a fantastic attacking performance from Westmeath, there’s no doubt that confidence will be sky high ahead of the clash against Cavan.