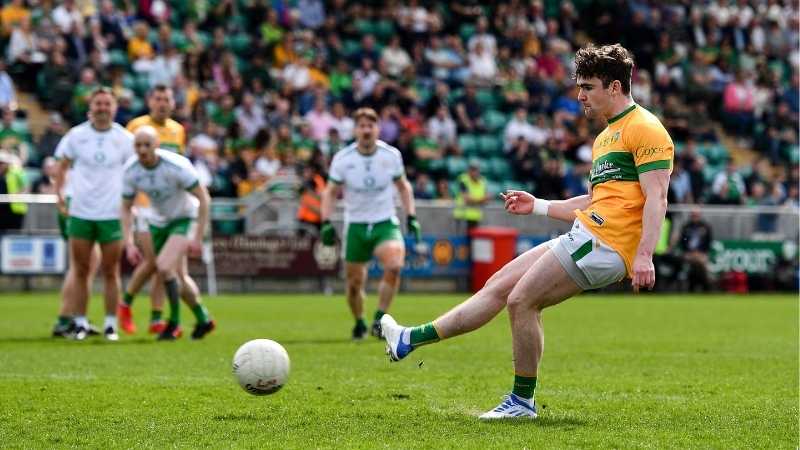 Leitrim just scraped over the line with a four-point victory over a resilient London at McGovern Park this afternoon to progress to a Connacht Semi-Final.

Leitrim distanced the Exiles in the second half but two late goals from the home side meant the visitor’s led by a single point for the final stages.

A Ryan O'Rourke goal in the last minute of the game finally gave Leitrim security and they emerged victors at Ruislip.

The Ridge County hit the ground running and put London under pressure.

The visitors came close through a Ryan O'Rourke miss and Mark Plunkett goal chance but weren't deterred and soon had their first score.

Darragh Rooney pointed from a free on 4 minutes as the Ridge County looked far the better despite keeper Darren Maxwell having to make a good save to keep out a Henry Walsh strike on goal at the other end.

O'Rourke scored Leitrim's second point on 9 minutes and soon after he stepped up to the penalty spot after Shane Moran was brought down in the square and slotted home a goal for his side to make it 1-2 to no score.

Henry Walsh got London's first point on 14 minutes from an acute angle while Chris Farley added another 60 seconds later.

Exiles captain Liam Gavaghan was positioned in midfield and won his side a number of frees going forward.

Farley kicked over the first but Leitrim hit back through points from Mark Plunkett and late change (for Riordan O'Rourke) Conor Dolan.

The sides exchanged points over the next 10 minutes although London were beginning to look stronger.

Despite free-taker Farley having to exit the field due to injury, Gavaghan struck one from 25 yards on 34 minutes.

Stephen Dornan got a point soon after and Gavaghan stepped up to put over another free at the end of two minutes added time to put London within a point at half-time.

Leitrim started the second-half like the first and notched two points through Pierce Dolan and Donal Wrynn.

Another O'Rourke score and a successful Donal Wrynn 45 metre kick gave them a further advantage and they looked to be pulling away as London were yet to score.

When sub Jack Heslin broke through the London defence and laid the ball off to Donal Wrynn they had their second goal and it looked like the visitors' day.

With just over 10 minutes remaining, substitute Sean Hickey returned a goal for the Exiles and another sub, Fergal MacMahon, struck London's second with a wonder strike 5 minutes later.

The tide turned more in London's favour when sub Evan Sweeney was black-carded for Leitrim and James Hynes went up the field to bring the deficit to a single point again.

The pressure was on but London just couldn't equalise, with chances from Conal Gallagher and Liam Gavaghan going astray.
In the final stages of 6 minutes added on, it was Leitrim got the next score to finally put the game to bed.

Donal Casey did well to beat the London backs and got the ball to Ryan O'Rourke who struck to net his second goal of the game to give his county a four-point lead much to the relief of the Leitrim support.

The final whistle was blown in the aftermath and it was Leitrim who scraped through to a Connacht semi-final with victory over a tenacious London side.