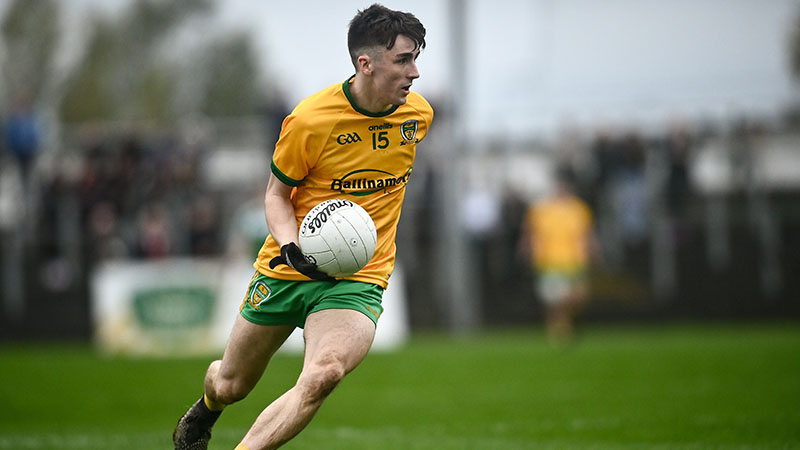 A Tom Prior point in the fourth minute of injury time gave Sean O’Heslins the two valuable points on offer in this classic Connacht Gold Leitrim Senior Championship Round 3 game played in glorious conditions in Ballinamore on Friday evening.

It looked as though there would be a share of the spoils when Fiachra McGuiness slotted over a Mohill equaliser close to the end of the allotted three minutes of injury time added on by referee Seamus Mulhern.

From the resulting kick out the home time worked the ball up the field and when a booming Niall McGovern kick broke off Paul Moran to Prior, he made no mistake in firing over the Mohill crossbar with his right foot in what turned out to be the last kick of the game.

It was hard luck on Mohill who took the lead mid-way through the second half and it looked like they were going to strike for home but 2021 champions showed a never say die spirit.

Eamonn O’ Hara’s team fought back with a fantastic Shane Quinn effort from 45 metres in the 27th minute and McGuinness came up with the leveller before Prior broke Mohill hearts with the winner in a man of the match performance from the diminutive Leitrim star.

Ballinamore started brightly and led by four points after ten minutes. Niall McGovern put Eddie Bouabbse’s team in front after sixty seconds and this was followed by a pointed free from Prior in the third minute and further scores from Mark McGrory and Paul Moran.

Jordon Reynolds goaled for the visitors in the tenth minute when he fielded a long ball, turned his marker and shot low to the net from the 13 metre line. This kick-started Mohill had they added first half points from Keith Beirne (3) and a fine effort from Domhnaill Flynn.

Prior kicked a monster score from just inside the 45 metre line to add to a Niall McGovern free from long distance to leave the score 1-4 to 0-7 at the break.

Sean O’ Heslin’s were dealt a heavy blow in the 20th minute when they lost Dean McGovern with a knee injury and this was compounded when his replacement Shane Murphy had to be replaced in the 26th minute.

Shane Moran kicked his team into the lead in the third minute of the second half from a mark after catching a high ball despite the attentions of two Mohill defenders before Beirne equalised from a close in free two minutes later.

The Ballinamore men could have put real daylight between the teams when Prior set up substitute Peter Reynolds for a goal chance in the sixth minute of the second half but his effort rebounded off the post to safety with Padraig Tighe beaten in the Mohill goal.

Prior pointed from play a minute later to give his team a 0-9 to 1-5 lead before a wonderful score from Domhnaill Flynn from play in the 9th minute restored parity.

Jordon Reynolds restored the Mohill lead with a long-range effort in the 13th minute that landed on top of the net.

Luke Murphy kicked a long-distance leveller in the 15th minute to draw the home team level and another superb Murphy effort together with a Paul Moran 45 gave the reigning champions a two-point cushion in the final stretch which was wiped out by the majestic effort from Quinn and the McGuinness point before the mercurial Prior had the final say to send the sizeable the home supporters into raptures in a thrilling encounter.