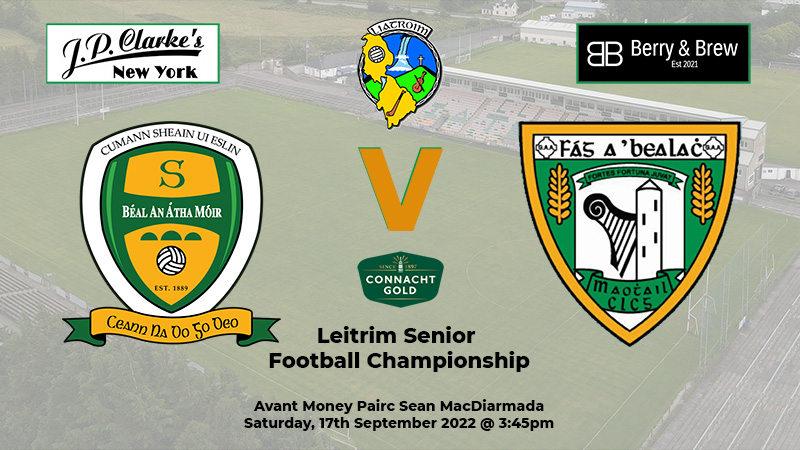 Eamonn O’ Hara’s Mohill advance to a semifinal meeting with Leitrim Gaels after dethroning last year's champions in a game played in glorious sunshine on Saturday evening. The large crowd were treated to a high-quality contest where ultimately Mohill’s ability to take their goal chances proved the difference.

Keith Beirne was again in exceptional form ending with an 11-point haul as well as setting up his team’s first half goals for Keith Keegan and Jordon Reynolds with exquisite passing skills.

Mohill dominated the first half and lead by 2-7 to 1-4 at the break. They raced into a 0-6 to 0-2 lead after 15 minutes with Beirne hitting five as well as a white flag for Jordon Reynolds. Wayne McKeon and Luke Murphy hit the target with points for the reigning champions from frees.

Niall McGovern went agonisingly close with a shot at goal in the ninth minute which went narrowly wide of Padraig Tighe’s goal.

The opening goal in the 16 th minute was a contender for goal of the championship. Mohill had possession at the corner flag, the ball was recycled out to Beirne on the 20 metre line close to the sideline and somehow, he had the vision to pick out the run of Keith Keegan with a sublime cross field pass who shot to the top right-hand corner of the Ballinamore net.

Ballinamore’s woes were compounded in the 20 th minute when Beirne crossed high from the right-hand side and this time Jordon Reynolds rose highest to field and shoot past Darren Maxwell from close range.

Trailing by nine points Ballinamore retreated into defence mode for a few minutes and manager Eddie Bouabsee introduced Mark McGrory and Brian Leydon who made a real difference after their introduction.

McGrory Fielded a long booming delivery from Wayne McKeon and dispatched the ball to the back of the Mohill net in the 29 th minute and this left the champions with a slightly lower mountain to climb in the second half.

The Ballinamore resurgence continued with two early second half points from McKeon and Dean McGovern before Beirne steadied the Mohill ship with a pointed 45 metre kick after six minutes.

Two McKeon frees in the tenth and 11th minutes reduced the deficit to three points before a Beirne free in the 14th minute made it a four-point game.

The turning point of the game came in the 16th minute when Ballinamore turned over a Mohill attack on their own 65 metre line. Dean McGovern passed inside to Tom Prior who hand passed to McGrory and his attempt to palm the ball in to the net ended up with the ball going inches wide of the left-hand post.

Mohill never looked back from this let off and outscored their opponents by 0-5 to 0-2 in the final 12 minutes with points from Beirne (0-3), Shane Quinn and Sean Harkin with Shane Moran scoring two great points from play for the gallant losers.