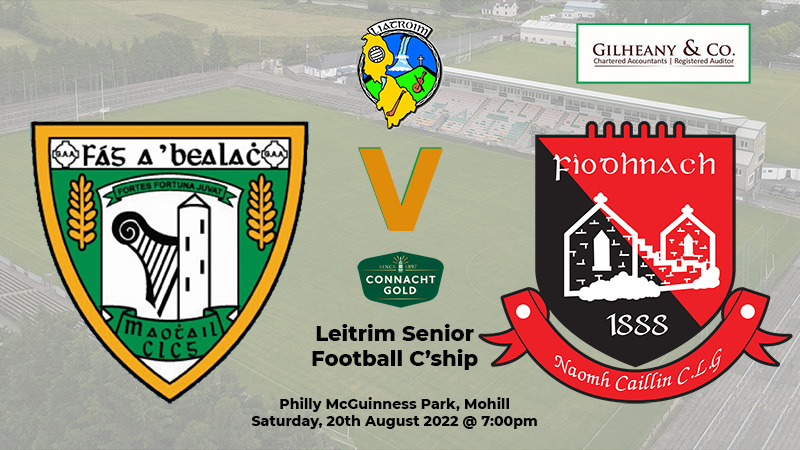 Ray Tubman’s Fenagh overcame their neighbours Mohill in a thriller at Philly McGuinness park with three points to spare.

Having lost the last three championship encounters between the teams since 2020, Fenagh signalled their intent with a Ryan O’ Rourke point in the opening 20 seconds.

The lead didn’t last long with Keith Beirne blasting to the net in the second minute after a fielding a long ball from Domhnall Flynn. Beirne could have goaled again in the third minute but was denied by a great save by Shane Doonan in the Fenagh goal.

Doonan was again the hero for Fenagh in the 14th minute when he dived full stretch to deny Domhnaill Flynn what look like a certain goal with a blistering shot from the 13 metre line.

Immediately after the second Doonan save, Fenagh broke forward at pace and Fergal McLoughlin’s long ball in was caught by Oisin McLoughlin who rounded Padraig Tighe in the Mohill goal to fire Fenagh into a 1-4 to 1-2 lead in the 15 th minute.

With Ryan and Riordan O’ Rourke in terrific form, ably assisted by Oisin McLoughlin, the visitors went in leading by 1-8 to 1-6 at the half time whistle with Keith Beirne contributing the entirety of the first half scores for Eamonn O’ Hara’s team.

The second half was a ding dong affair with both teams in all-out attack with great forward play and some excellent defending especially from Shane Quinn at centre half back for Mohill who turned over Fenagh attacks time and again.

The Mohill rally came early in the second half with Beirne picking up from he left off at half time and contributed five more points together with efforts from Fiachra McGuinness, Ronan Kennedy and Conor Quinn.

The O’ Rourke cousins continued their excellent form with Ryan hitting two and Riordan sending over three points including the insurance score in the final minute to give Fenagh a two point cushion before Fergal McLoughlin gave his team a three point lead in stoppage time of this epic encounter.

The midfield battle was terrific all through with Keith Keegan and Jonathan Reynolds, and later Alan Armstrong, sharing the spoils with Donal Wrynn and Jack Gilheany in that sector over the hour.

Wrynn kicked two vital points from long distance placed balls close to the end when Mohill were piling on the pressure in search of an equalising score that wasn’t to come.

This was championship fare of the highest order and a treat for all spectators in attendance at Philly McGuinness Park.