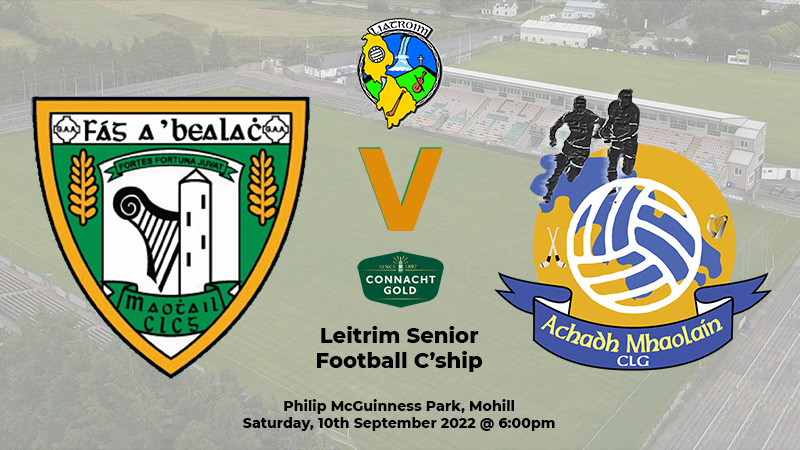 A flurry of goals from a potent Mohill forward line saw Eamonn O’ Hara’s team pick up the two valuable points on offer in an enthralling round 4 game played in summer-like conditions on Saturday evening.

The supporters in attendance at Philly McGuinness Park were treated to a score fest in which the more clinical Mohill team edged out the 2018 Champions by a seven-point margin.

A brace apiece from Keith Beirne and Jordon Reynolds as well as an excellent finish from right half-back Alan Tuthill served notice that Mohill have the firepower to have a big say in the remainder of the campaign.

Despite kicking a fantastic 18 points the visitors will rue two missed gilt-edged goal-scoring opportunities in the first half when Gary Plunkett and later Morgan Quinn were brilliantly denied by Padraig Tighe in the Mohill goal.

Mohill led by 3-3 to 0-9 at the halftime whistle. The first goal came in the fourth minute when Jordon Reynolds caught a long ball before turning and finishing low to the net past Colin McGuire. Alan Tuthill scored the second two minutes later when he got forward to finish off a fine move involving Keith Beirne and Domhnaill Flynn.

Aughawillan relied on points from Morgan Quinn, Mark and Gary Plunkett and Pearce Dolan to leave the score 2-0 to 0-5 after 11 minutes.

Aughawillan were dealt a blow in the 12th minute when Fergal McTague was black carded by referee Gareth Foley and their woe was compounded in the 15th minute when Beirne hit the net from close range after beating three visiting defenders in the process.

Despite the goals conceded Aughawillan kept coming back and points were added by Morgan Quinn (3), Stephen Gilheany and Mark Plunkett left them trailing by three at the break.

Aughawillan, through Pearce Dolan, dominated midfield throughout the game and they started the second half brightly but couldn’t translate possession into scores and Mohill punished them in the 34th minute when Keith Beirne scored his second goal after a swift counterattack.

Mohill started to target their kick outs towards Alan McLoughlin in the right-half forward position and he really impacted the  Aughawillan dominance in the midfield sector.

Jordon Reynolds got on the end of a long delivery from Shane Quinn in the 48th minute and he expertly placed the ball into the Aughawillan net to leave eight points between the teams.

Aughawillan continued to rally and hit some excellent points from Barry Prior (2), Christy Prior, Brian Stringer, Morgan Quinn and Fergal McTague but they couldn’t get the vital goals needed to put pressure on the home team as the game entered the final stretch.

The winners responded with good scores from Domhnaill Flynn, Ronan Kennedy, Liam Rowley and the outstanding Beirne to set up a mouthwatering clash with Ballinamore in the quarter-final.