Allen Gaels get off to winning start in Intermediate Championship 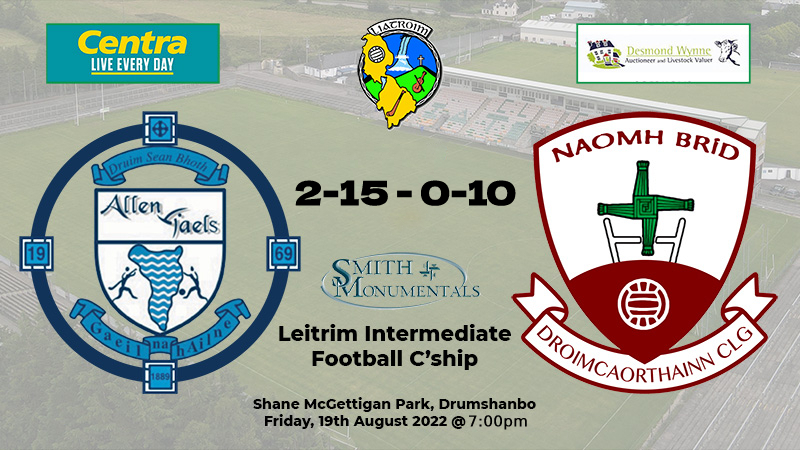 Ciaran Walsh kicked 1-05 as Allen Gaels made a winning start to the Smith Monumentals Intermediate Championship at Shane McGettigan Park.

Drumkeeran put in a solid first half performance but trailed at the break - 1-05 to 0-07. Walsh with the goal in the 28th minute to draw his side level. Allen Gaels punished their neighbours in the second half with Drumkeerin only scoring three points after the break.

The sides were level twice in the opening quarter. Points from Daniel Maguire and Ross Harrison put Drumkeeran ahead by two points in the 16th minute. Caleb Duffy and Ciaran Walsh drew the home side level in the 19th minute. Walsh also brought a save out of Drumkeeran netminder Kevin Forde minutes before.

Francie Devitt and Cathal McCauley restored Drumkeeran’s two-point advantage in the 24th minute. Two minutes later Shane Beirne had a goal chance for the home side that just went wide. Devitt pointed over to extend their lead to three in the 28th minute

Walsh raced through in the 29th minute, and despite being put under pressure by two defenders, he fired an excellent shot to the net. The game was level. Just before half-time a pointed free from Moran gave his side a slight advantage at half-time.

Colm Clarke got Drumkeeran’s first point of the second half in the 40th minute but Allen Gaels went down the other end and scored a second goal; a fine shot by Shane Walsh.

Ciaran Walsh and Duffy kicked over fine points before Devitt hit over a free for Drumkeeran in the 46th minute.

The home side replied with points from Moran, Shane Walsh and Duffy to go 11 points ahead with two minutes of normal time remaining. Allen Gaels sub Brian Mulvey got a point his performance deserved in stoppage time. Devitt kicked over a free with the last kick of the game in a disappointing evening for his side.