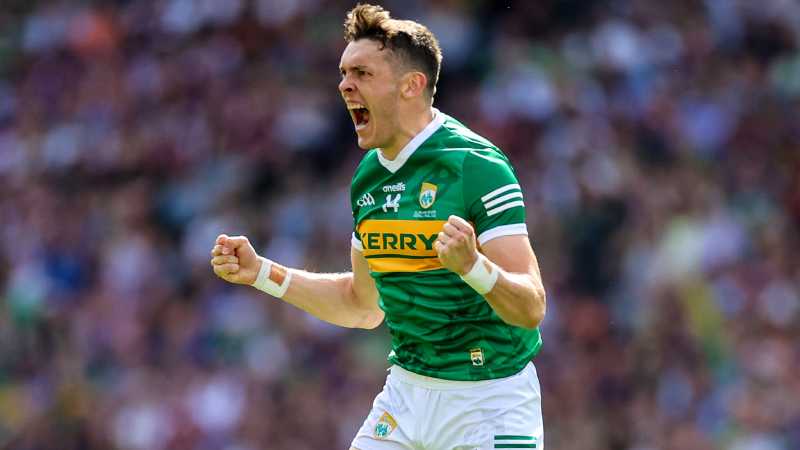 Kerry are All Ireland Champions for the 38th time, coming from behind to defeat a valiant Galway side at Headquarters this afternoon.

David Clifford kicked 0-8 in a starring role for the kingdom as they ended an eight-year-long famine, to once again bring the Sam Maguire Cup to Kerry.

Galway will feel hard done as they looked the better, Shane Walsh deserving of an All-Star after his role today, Cillian McDaid another superstar for them, but it will be the Rose of Tralee playing here for the next year.

Shane Walsh was the catalyst for how Galway controlled the opening half, kicking 0-5 he was the tip of the spear, as Kerry were not methodical enough with how they played football, the glittering forward line missing the mark on numerous occasions.

Kerry failed to get their attacking radar working early but two wides knocked their confidence early, Shane Walsh had Galway ahead after four minutes, Johnny Deaney doubled their lead three minutes later but for a block by Stephen O’Brien it could have ended up in the back of the net.

The Kingdom had three scores from frees in the opening 17 minutes, but by then they were still behind 0-5 to 0-3, however, David Clifford and O’Brien brought their side level by the 20th-minute mark. Walsh was on his A game in the opening half, another free had them ahead, but Clifford would reply well after soaring into the air to claim a mark, he tapped into the Davin End to level once more.

From here the game began to get tighter with both exchanging scores, Jack Glynn and Cillian McDaid both coming forward to kick Galway into a one-point lead after Sean O’Shea had levelled the tie for the third time minutes earlier.

Walsh started the second half of well for Galway with another score to strengthen their lead, back came Kerry with Clifford and Diarmuid O’Connor pointing to level again, Kerry went ahead after 412 minutes, Paudie Clifford has just got the equaliser, before David popped up to put them ahead, 0-11 to 0-10 after 41 minutes.

Cillian McDaid levelled seconds later, before Walsh again had Galway in front, Kieran Molloy and McDaid put them ahead by two after 46 minutes, 0-14 to 0-12, but Kerry failed to die as O’Shea and Graham O’Sullivan again made it all square, from here Kerry took control, Paudie and David both having points as they built a lead.

Walsh and McDaid brought Galway tight back into the tie, two crucial players for them with six minutes left, we were tied again, breathless stuff all day but Kerry would have their day, Clifford, Killian Spillane and Gavin White all scoring unanswered points before O’Shea pointed a late free for the Kingdom, 38 for them now eight years worth of celebrations to follow.