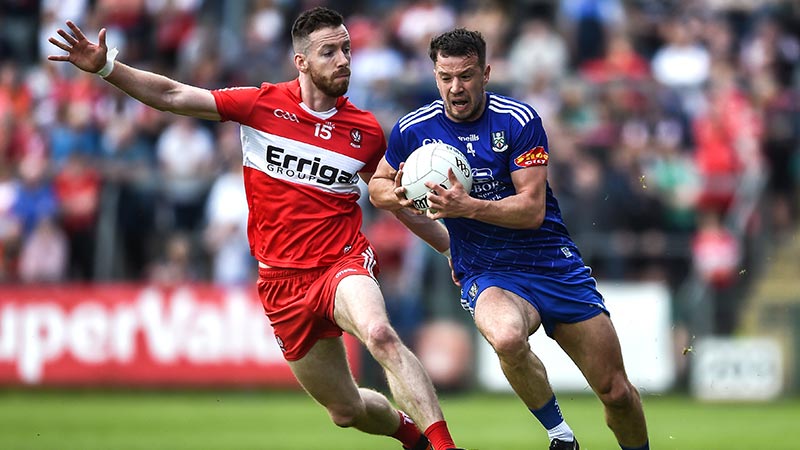 Derry will play in their first Ulster Senior Football Final in 12 years, after defeating Monaghan 3-12 to 0-17 at the Athletic Grounds.

Benny Herron struck the net in both halves, along with Gareth McKinless to give Derry a huge advantage in the tie, Monaghan coming good in the second half but just ran out of steam.

Shane McGuigan was another key asset for Derry, his 0-7 another catalyst behind the sides victory this afternoon, with Donegal now on the horizon.

It was a dramatic opening half, but at times rather slow and lethargic with Derry fully deserving of a lead at the break, they worked hard to get their scores and two goals coming at a vital time for them to control the game.

In a slow burner of an opening half, it was Derry who took the early advantage, Niall Toner putting the ball over the black spot from play, before McGuigan pointed a free. The Oakleaf county would continue to find their feet as McKinless hit the roof of the net, to make it 1-2 to no score after 12 minutes.

Monaghan finally got on the scoresheet seconds later, as Jack McCarron tapped over a short range free off his left boot, he would reply minutes later with a beautiful curling effort from range to make it a three point game. They followed it up with a goal chance but Ethan Doherty made a crucial tackle to keep them out.

Derry again hit the net after 24 minutes, Herron the scorer at the end of a build up started by goalkeeper Odhran Lynch, with a wonderful kick up field it was gathered and Herron was on hand to strike into an open goal mouth, McGuigan added two frees in between for a 2-4 to 0-2 lead.

Niall Loughlin and McGuigan continued to put Derry in the driving seat, but scores by Connor McCarthy, Darren Hughes and two from Conor McManus, reduced the deficit by the interval, as they trailed 2-7 to 0-6.

The Farney men battled hard into the second half, at times looking like they could snatch the game but once Herron added a second goal, it was like clockwork for Derry to rattle off scores and keep Monaghan chasing the tie.

Andrew Woods and McCarron got Monaghan within five points shortly after the restart, before two McManus frees and a Dessie Ward effort saw them trail 2-8 to 0-11 by the 48th minute.

McGuigan and Mcmanus exchanged frees as Derry kept their heads above the water, holding a four point advantage, Niall Kearns brought it back to three after 56 minutes, but a Paul Cassidy point was followed up by Herron’s second goal of the afternoon, shaking the hips and turning onto his left boot, leaving two Monaghan men in his way, to make it 3-11 to 0-13 on the hour mark.

It was a crunch final ten minutes in Armagh, Ryan McAnespie and McCarron kept Monaghan ticking over, but two points in injury time by McManus, only served as a consolation as they would suffer a four point defeat.