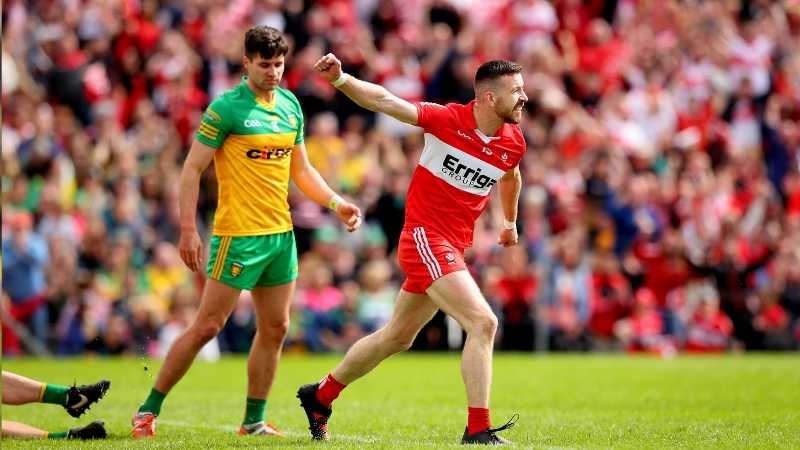 Derry have been crowned Ulster Senior Football Champions this afternoon with a narrow two-point victory after extra time over Donegal at St Tiernachs Park in Clones.

The Oakleafers were the better of the two sides over the 90 minutes of football and took the initiative early in the first half.

Donegal won the throw-in and were met with an immediate wall of red Derry shirts, which was the story of the opening minutes of the game. Both teams set up to make sure the attacking team would have trouble getting into scoring range. Michael Murphy dropped a couple of attempts short either side of a Conor Doherty wide for Derry.

Derry opened the scoring in the game and it was the green flag that was raised as Niall Loughlin found space inside the box to finish well and get Derry’s first goal against Donegal in Championship football in seven attempts.

The game continued in a defensive and cagey fashion. Donegal would reply quickly through a Shane O’Donnell point but the Oak Leaf county would take the next three white flags to race into a five-point lead after 20 minutes.

Two points in quick succession from Peader Mogan who was drafted into the starting lineup late on, and the ever-present Michael Murphy kept Donegal within touching distance.

Loughlin and Rogers for Derry followed by another Mogan score and a McBrearty free for Donegal saw the trading scores continue in the minutes before halftime.

Derry went into the break with a three-point lead but would be disappointed as they controlled the majority of the half. Half-time score Derry 1-06 - 0-06 Donegal.

Donegal bounce back immediately, leveling the game within a minute through Ódhrán McFadden Ferry who found the net after a good save from Langans initial shot.

Donegal took the lead through McHugh and O’Donnell but Loughlin replied from a free to make it a one-point game. Not much to separate the sides as expected before the game.

The close encounter continued as both teams exchanged points once more, with McGuigan pointing to level the game for Derry. Neither team able to take hold of the game with 15 minutes to go.

Michael Murphy showed his experience scoring from range when nothing seemed to be on to give Donegal the lead once more.

Three points in a few minutes, one from Donegal and two from McGuigan for Derry had the game level with 5 minutes to go, and that is how the second half would finish. Extra time required.

The defensive theme continued through the start of extra time. Aaron Doherty got the first score of the half from a forward mark off of a rare Donegal kick pass. Emmet Bradley quickly responded for Derry, the sixth time the sides have been level. This was the only scoring of the first half of extra time. HT of ET with the score tied at 1-13 apiece.

Derry took the lead early in the second half of Extra Time through another McGuigan free, his sixth point of the game. Rogers came forward from centre-half-back to put Derry into a two-point lead but Ciaran Thomson responded immediately to bring it back to one.

It wasn’t to be for Tir Chonaill however as Derry would add the insurance point in the last minute of regulation through Conor Glass. Donegal pushed for a goal with Michael Murphy shooting a free from twenty meters into a crowd of Derry defenders who cleared the ball to the final whistle.

Derry end their twenty-four-year provincial drought in a hard-fought battle with their neighbours and will celebrate long into the night.