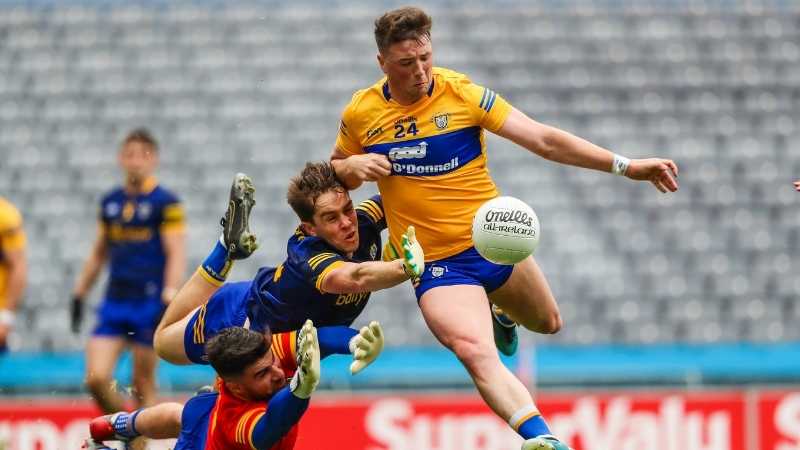 An incredible late comeback from Clare helped them reach their first AISFC Quarter-Final since 2016.

Jamie Malone scored from range in the fourth minute of added time to beat Roscommon by a single point this afternoon in Croke Park in what must be said was a thoroughly entertaining match throughout.

This game was one of incredible scoring from both teams, especially from range, as by half-time the two sides had outscored their totals in their League meeting earlier this year.

Cathal O’Connor settled his Clare side into the game early on, coming forward from midfield and pointing off his right foot to raise the first white flag of the afternoon.

Roscommon made a late change pre-game as Diarmuid Murtagh replaced Heneghan and it was Murtagh who made an instant impact by getting the first goal of the game.

Murtagh raised the green flag after just 6 minutes. Conor Cox’s attempted point dropped just short of the goal but Murtagh rose above O’Callaghan rushing out from the Clare net to fist the ball in and put the Rossies in the lead early on.

The early goal really opened up the game from the off as Clare pointed twice in a couple of minutes to bring the game back to level scores after 10 minutes.

Conor Cox and Diarmuid Murtagh both scored from frees shortly after to put the Rossies back in the lead.

The game would change after this, the Banner gained all the momentum as Emmet McMahon rose the white flag just before Keelan Sexton, who wasn’t originally listed to start the game, powered through the Roscommon defence and past Lavin in the Rossies net to raise the Green flag for his side for the first time in the game. His attempted shot may have taken a deflection off of Roscommon goal scorer Diarmuid Murtagh but the ball dribbled over the line and Sexton celebrated as if it was his goal. Clare took the lead in the game once more.

An excellent first half of Football was summed up with some stunning back and forth football after the goal. Ciaran Murtagh twice and Cian McKeon scored three points in three minutes but Clare stayed in touch with three in three of their own through McMahon, Cleary, and Collins.

Cathal O’Connor stepped forward from midfield for his second point of the game to give his Clare side a three-point lead. A score that just added to the awesome exhibition of points scoring from range that we were witnessing.

A Keelan Sexton brace of points gave Clare a healthy lead just before the break. The Banner would be annoyed at the half as they gave up a free to Diarmuid Murtagh, with the goal kick in added time ending up back in the Rossies' hands who capitalized on the mistake with Niall Kilroy bringing the deficit back to just two points at the break. The half-time scoreline, Clare 1-10 Roscommon 1-8

Keelan Sexton opened the scoring at the start of the second half almost instantly, his long-range attempt from the floor sailed over the bar, another excellently taken point.

Despite the early score, it would be Roscommon who took command in the opening phases of the second half.

Six unanswered points from Roscommon seemed to have the Rossies in command of the match as manager Anthony Cunningham would be delighted with the strong impact his players had off the bench.

Keelan Sexton once again from a free stemmed the Roscommon tide on 60 minutes to keep Clare in the game, their first score in 25 minutes.

Donie Smith and Ciaran Murtagh followed up with scores that with five to go in the game would have many thinking the game was put to bed.

The Clare comeback began on 69 minutes, Eoin Cleary from a free reduced the deficit to four.

The major turning point would come on 70 minutes. Cooney was hauled down to the box, the Referee immediately blew the whistle and with his arms outstretched gave Clare a spot-kick to bring them back into the game late on.

Keelan Sexton banished their Munster penalty shootout horrors, smashing the ball right down the middle of the goal, a one-point game going into five minutes of added time.

Sexton would level the game a minute later from a placed ball just outside the 45-meter line. A huge pressure kick for the Kilmurry Ibrickane but he showed his quality by placing it over the bar comfortably.

The winning score came on 74 minutes. Remarkably, this would be the only score from play for the Banner County in the half. Jamie Malone stepped forward and took on the shot off his right foot which sailed over the bar to the massive roar of the traveling Clare faithful who knew this would be enough.

Roscommon had a late last-ditch attempt drop wide and the full-time whistle went as Clare progress to the Quarter Final.

The Banner will sit back and enjoy the rest of the qualifiers when their heart rates come down as they await to see early next week which Provincial Champions they will be drawn against.