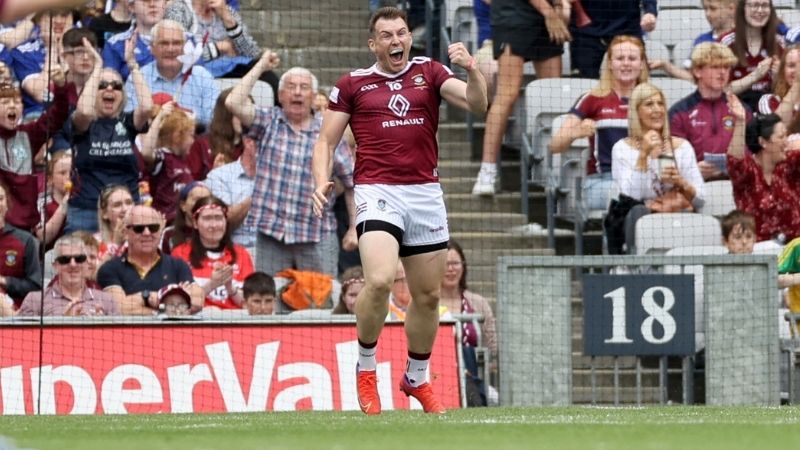 A wonderful solo goal from substitute Kieran Martin just minutes from full-time sealed Tailteann Cup glory for Westmeath in a 2-14 to 1-13 win over Cavan at Croke Park.

It was Cavan who started the slightly stronger of the sides and found the game’s first score in the first minute after Raymond Galligan’s short free found Gerard Smith who calmly slotted the ball over.

Oisin Kiernan was next on the scoresheet for the Breffni Blues but another point from Westmeath's Ronan O’Toole before two quick-fire points from John Heslin gave Jack Cooney’s side the lead.

Cavan struggled with centre forward O’Toole’s movement and the Westmeath talisman caused Cavan issues from the off. James and Gerard Smith put Cavan back in the lead and a Gearóid McKiernan free stretched their lead back to two points midway through the half.

O’Toole and McKiernan traded two scores each in the moments following but in the 27th minute, Westmeath scored the first goal of the game. Luke Loughlin passed the ball along the ground into the path of Lorcan Dolan who rifled the ball into the top corner to give his side a deserved lead.

Loughlin and Paddy Lynch added more points towards the latter stages of the half but it was the Leinster side who went into the interval with a 1-8 to 0-9 lead.

Lynch found the first score of the second half before a Sam McCartan free for Westmeath. Cavan levelled the game in the minutes following with points from Stephen Smith and Jason McLoughlin.

Luke Loughlin kept his good form during the second half and scored a great point shortly after before a defensive howler from Westmeath led to a Cavan goal.

Jason Daly failed to deal with a high ball and he parried it into the path of Padraig Faulkner who finished from close range to give Cavan the lead. Gerard Smith and Paddy Lynch extended their lead before the game turned upside down for the 2020 Ulster champions.

Thomas Galligan was shown a straight red card after a shoulder into the face of Ronan O’Toole, meaning Cavan had to play the remaining quarter of an hour or so with 14 men.

Two points from Sam McCartan and one from Ronan O’Toole levelled the game with just minutes left.

In the 67th minute, substitute Kieran Martin embarked on a terrific solo run resulting in a second goal for Westmeath, dealing Cavan an even bigger blow than the red card.

Ronan Wallace’s point in the final seconds sealed the four-point win for Westmeath as they were crowned the first-ever Tailteann Cup winners.