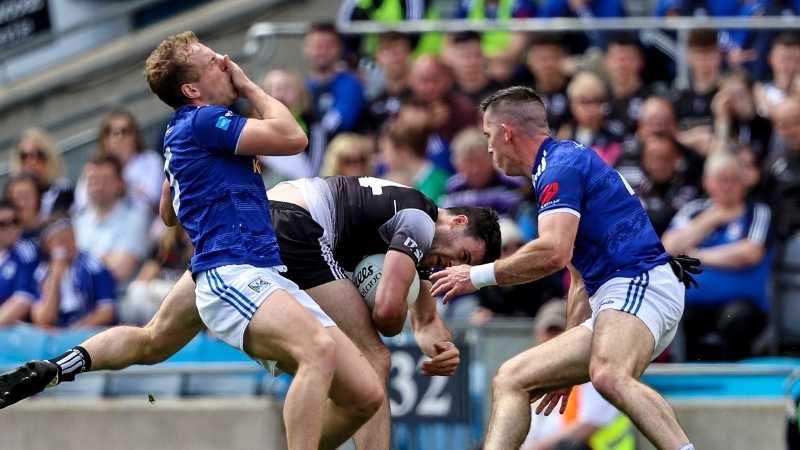 Clinical Cavan progress to the inaugural Tailteann Cup Final in a few weeks' time after an entertaining three-point victory over Sligo in Croke Park this afternoon.

This contest was an excellent display of Gaelic Football which showcased the competitiveness and success of the Tailteann Cup in its first appearance on the GAA calendar.

Sligo will rue a heap of missed scoring opportunities right from the off as their opponents proved to be very calm in front of goal from all areas of the field, especially in the opening stages.

Incredibly, the 15 scores in the opening half of the match were scored by 15 different players.

It was Cavan that got the scoring underway in the opening minutes of the game. Martin Reilly popped over a point from close range which was shortly followed by James Smith emulating his forward’s action a couple of seconds later.

Both teams had early possession but Sligo would not capitalise on early chances, tallying a couple of wides. Cavan continued to be better in front of the goal with Thomas Galligan added to the points scoring for the Breffini county on 5 minutes to pull his team's lead out to three points.

Oisin Kiernan added a fourth white flag score for Cavan at the 10 minutes mark of the first half. At this point, Sligo were 0 from 6 from scoring attempts, which is surprising from a team that were so clinical in front of goal in their previous matches in the tournament so far.

Two more Cavan scores in a couple of minutes from Conor Brady and Paddy Lynch widened the lead for the Breffini men. Their opening six points coming from six different players.

It took 16 minutes of play for Sligo to get on the board. Pat Spillane coming forward from midfield kicked over the bar into the Hill end to stem the scoring and give Sligo a well-needed boost.

The momentum shift came on 20 minutes. Luke Towey opened up the Cavan defence and was taken down through on goal, the referee left with no choice but to award a spot-kick. Patrick O’Connor stepped up and coolly slotted into the bottom left corner sending the keeper the wrong way. Sligo were back in this after a slow start.

The penalty opened up the game as Killian Brady and Pat Hughes exchanged points with a lot more opportunities being created by both sides' forwards.

Darragh Cummins pointed for Sligo off of a quick free-kick routine which caught the Cavan defence napping to bring the Yeats men within a point. Cavan will be very disappointed that their early control of this match slipped away from them as the half progressed.

Cavan regained control of the match before the break. Smith, McKiernan, Galligan and first-half sub Cian Madden all raised white flags within 4 minutes of the break for the Breffni men.

Both teams had goal chances late in the half which could’ve turned it on it’s head but some superb goalkeeping from both keepers and Oisin Kiernan in the Cavan defence prevented the scoring.

Halftime substitute Niall Muphy opened the scoring after the interval for Sligo. The former Aussie Rules Ireland international became the 16th different scorer in the game.

Murphy was the first to add a second score to a solo tally in the game raising another white flag on 40 minutes. A much-needed fast start to the half for the Yeats men.

Sligo goalkeeper Devaney was forced into two saves from Gearoid McKiernan early in the half. Devaney prevented two right-footed attempts which would've put Cavan out of sight.

The opening stages of the second half were free-flowing. Both teams went back and forth on a number of scores. No team ever going more than two points without their opponents' reply.

Coming into the final quarter of the match Sligo had drawn the deficit back to just two points with Patrick O’Connor and Niall Murphy keeping the Yeats men in touch.

Arguably the best players for either team on the day, Gearoid McKiernan with his third and Niall Murphy with his fourth continued the scoring exchange with just under 10 minutes left to play in the game.

McKiernan added his fourth score of the game within 5 minutes to go to keep Sligo at bay.

Thomas Galligan had an opportunity to put the game to bed with a goal chance but once again, it is not taken as he rattled the side netting.

Gerard Smith came into the game late on and his score into the first of six additional minutes almost certainly put Cavan through.

Alan Reilly and Sean Carrabine capitalised off of the Cavan kick-out to score late on but it was Gerard Smith once more, in the 76th minute who would finish the scoring on the day.

Cavan win out by three points with 17 of their scores coming from play.

Sligo gave it their all but the Ulster side proved a step too far but they will come away happy with their efforts in the tournament this year.