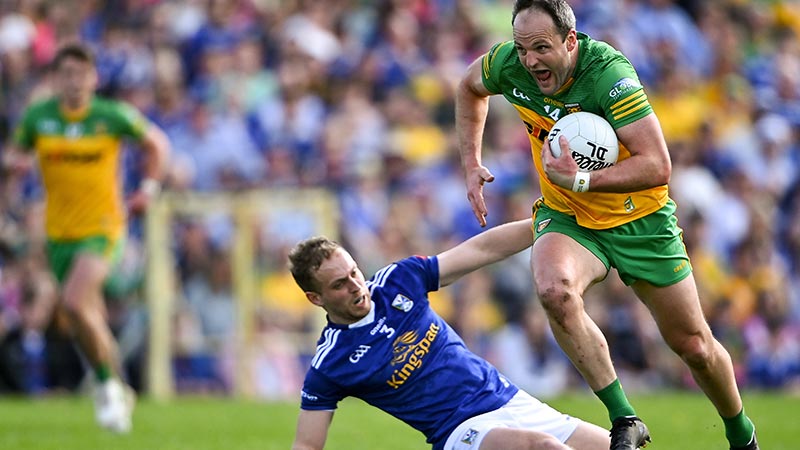 Conor O’Donnell and Paddy McBrearty both found the net late in the second half, to see Donegal advance to the 2022 Ulster Senior Football Final.

The final beckons for Donegal but they had to work for the result, a 2-16 to 0-16 win over a game Cavan opposition will feel hard done by but for Donegal it is a tenth final in 12 years.

Michael Murphy, McBrearty and Jamie Brennan all influential for the men in green and gold, a great result for them building confidence ahead of the final in a few weeks time.

It was Cavan who signalled their intentions after a couple of seconds, Paddy Lynch finding his range to raise the white flag, two frees for Donegal either side of a Gerard Smith score had the game tied at 0-2 after 7 minutes.

Lynch added two quick fire frees to double the Cavan lead, Ciaran Thompson pulled one back for Donegal, but a goal chance was on the cards if he squared it and they could have gone ahead, but James Smith replied to make it a two point game again.

Murphy and Brennan kicked Donegal within a point by the 19th minute, but two well taken scores by Thomans Galligan made it a three point game after 21 minutes. Donegal again hit back through Murphy and Brennan, as very little could separate the two with the scoreline 0-8 to 0-7 after 24 minutes.

Lynch made it a two point game after 24 minutes, but McBrearty and Brenna clawed their team back into the tie at the interval, tied 0-9 to 0-9, a tight half dominated by Lynch on one side and the Donegal forward line at the other, Cavan could have had a goal however after 31 minutes a high ball into Smith his shot cannoned off the bar a great save by Shaun Patton.

Despite Smith getting on the board shortly after the restart, it was all Donegal in the early exchanges Peadar Mogan with the first of four scores to see them 0-13 to 0-10 ahead after 44 minutes. Smith and Gearoid McKiernan hit back for Cavan to put them back within a point after 48 minutes.

McKieran raised the white flag twice in quick succession to draw Cavan level again after 57 minutes, the fifth time the sides were level in the contest, when it looked like nothing could separate them McBrearty pointed, before substitute Conor O’Donnell found the back of the net just after the hour mark, the ball landing perfectly on his boot after a failed Cavan clearance from a high ball.

From here Donegal had breathing room with McBrearty on hand to score another free after 65 minutes, the game looked beyond doubt as Raymond Galligan stepped up to kick a long range free. McBrearty finished his day with a tally of 1-4 gathering a high ball before turning and hitting the net on 68 minutes.