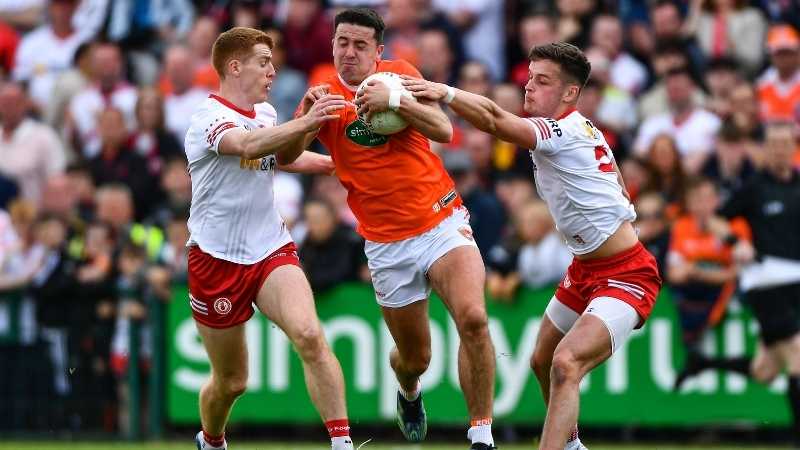 Armagh got an impressive six-point win over rivals Tyrone today at the Athletic Grounds, progressing in the All-Ireland qualifiers as the current holders took a shock early exit from the Championship.

Despite a goal after just three minutes from Tyrone’s Conor McKenna, Armagh got into their rhythm after Aidan Nugent hit the net 10 minutes later. The hosts were the aggressor and better side in the first-half but Darren McCurry’s four points kept Tyrone just a point adrift at the break.

A quality team performance from Kieran McGeeney’s men sees them advance to Round 2 of the qualifiers as they knocked out the champions who were simply off the pace this afternoon. Armagh were first to any 50/50’s and were far more inventive with their forward play, Aidan Nugent and Rian O’Neill starred in the first and second-half respectively.

The opening moments were quite deceptive however as Conor Mckenna rattled the net after a mix-up at the goalmouth giving the Red Hands the lead. It didn’t seem to affect the mentality of Armagh at all though, who responded with scores from Aidan Nugent and Conor O’Neill.

The next 10 minutes would prove to be a crucial phase as the home team really found their rhythm. Traditionally a forward but in goal today, Ethan Rafferty scored a brilliant point from range before Nugent grabbed Armagh’s goal following a solo run.

As Jason Duffy and Stephen Sheridan scores followed it became evident that Armagh were in the mood. Tyrone started to look quite flat and would only get two more scores in the half hour that followed Mckenna’s early goal.

However Darren McCurry did all he could for the visitors scoring four points in the next 15 minutes to miraculously leave the O’Neill county a point behind at the break. It was still anyone’s game despite the contradicting performances and Armagh were sitting on numerous yellow cards.

Sub Richard Donnelly received a black straight into the half though which didn’t help Tyrone matters as Rian O’Neill popped over some frees. Feargal Logan and Brian Dooher brought on some big names like Cathal McShane and Darragh Canavan but this had no impact and McCurry was still one of three scorers on the hour mark.

It was a predictable and gradual pull away from the Orchard County as Stefan Campbell came into the game and keeper Rafferty got a second point. Tyrone kept battling and Conn Kilpatrick and Donnelly scores tightened things back up near the end.

Armagh had enough of a cushion though in the final stages and two points from late substitute Andrew Murnin sealed a six-point win against their bitter rivals.