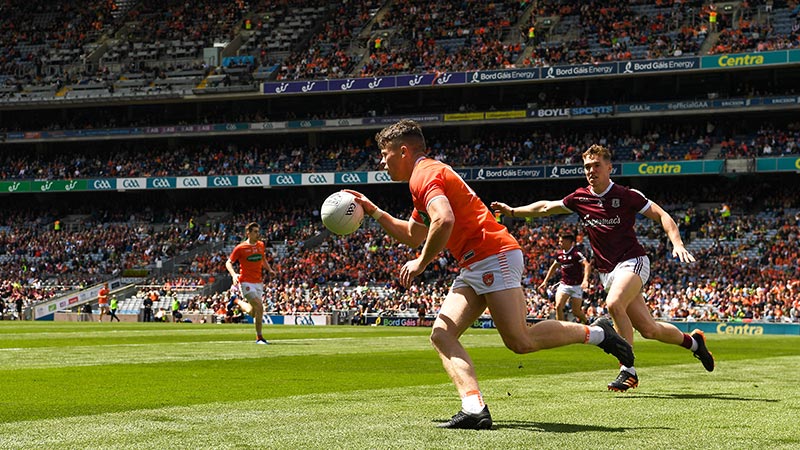 Galway beat Armagh on penalties in an incredible war of attrition in front of a big Croke Park crowd to advance to their first All Ireland Semi-Final since 2018.

The Tribesmen now know that Ulster Champions Derry await them in the Semi-Final in two weeks' time back in Croker.

The game was as tight as many predicted, with both teams very evenly matched and struggling to pull away, which after two one-sided Quarter-Finals yesterday, was important for the game.

Galway believed they had the game won in regulation with a four-point lead in the dying minutes and a man advantage, but a dramatic Armagh comeback including two goals and a mighty Rian O’Neill equalising point levelled at the death.

Clinical from the spot, the Tribesmen went 4 from 4 with Campbell and Turbitt missing for Armagh. Tierney, wearing 27 after being cut up in the red card incident scored the winner.

Galway struggled to break down a very strong Armagh block and get up to match speed early on. It was Comer who got the opening score of the game for the Tribesmen but Armagh would take control with the next four points through Grugan, Campbell, O’Neill and Nugent. Armagh holding a commanding lead in the opening quarter of the game.

The Tribesmen figured out shortly after how to get some change out of the Armagh defence, with some range scoring getting them back in the match through Tierney, Finnerty, and McDaid.

The Orchard kept Galway at bay through the first and second dead ball scores of the afternoon, both pointed by Rory Grugan off the left.

Shane Walsh showed his class for Galway bringing them back to within a point with two free-kicks, one off of each foot. An incredible talent to have in the modern game.

Matthew Tierney brought the sides level on the 33rd minute from play, and that would be the final score before the interval. Draw game at the break, a scoreline of Armagh 0-7 0-7 Galway.

Galway drew first blood at the start of the second half through Matthew Finnerty kicking into the Hill 16 end but Armagh levelled immediately through Conor O’Neill’s fisted effort.

The first green flag went to Galway on 40 minutes. Matthew Tierney’s effort was tipped onto the bar but the resulting possession and scrambling Armagh defence left Johnny Heaney wide open to palm the ball into the back of the net. Shane Walsh added a point immediately off the restart to put Galway into a 4 point lead.

Armagh showed levels of calmness similar to that against Donegal by bringing themselves back into the game through Nugent and Campbell scores.

Finnerty, Kelly and blood sub Ó Laoí kept the Galway scoreboard ticking between a Campbell score for Armagh to leave the Tribesmen leading by four with 15 to play.

The Orchard would not go away without a fight. Rian O’Neill and sub Conor Turbitt brought the deficit back to just two. Galway without a score in over 10 minutes.

Greg McCabe saw red from referee Goldrick after a shoulder tackle that made some head contact with Matthew Tierney. Tierney required some patchwork as the tackle drew blood and was replaced by Ó Laoí, coming in as a blood sub for the second time.

Paul Conroy made the man advantage count five points with a superb long-range point to all but surely write the Tribesmen on the Semi-Final ballot...

Or so they thought, Armagh staged a dramatic comeback in the eight minutes of injury time at the end of regulation.

Nugent brought the Orchard within three on the 71st minute with a close-range finish, Armagh full of energy as a result.

Comer brought the game back to two scores shortly after.

Armagh came back once more though, Conor Turbitt smashed home just inside the box on the 75th minute after Gleeson in the Galway net failed to clear.

Rian O’Neill stepped up to kick the equalising point from about 55 metres out to bring the game to extra time, capping an incredible Armagh comeback.

Full-time saw unsavoury scenes with a brawl between huge numbers from both teams. A lot to be sorted out after the game with potential suspensions to follow.

Galway won the first half of extra time by three points to two. The game slowed down as the pace of the 80 minutes caught up to the players.

Shane Walsh, either side of a Finnerty score was the Tribesmen scoring. Justin Kieran levelled for Armagh early in the half and Rian O’Neill made sure the deficit was at the minimum going into the second half.

Armagh took control at the start of the second half. A looping high ball could not be dealt with by Gleeson in the Galway net with Grugan taking advantage to parry the ball into the net and give the massive Armagh crowd hope of a semi-final.

Galway replied within seconds, Cillian McDaid broke through on the back of intricate Galway passing to smash low and hard past Rafferty to give the Tribesmen the advantage once more.

Sub Eoin Woods pounced on a bouncing ball falling backward to somehow point and level the game for Armagh, just when we thought we had seen everything.

Hall thought he had won it for Armagh but McDaid levelled in additional time of extra time to send the game to spot-kicks.

Shane Walsh stood up first, scoring for Galway in front of the Davin Stand.

Campbell smashed over to give the Tribesmen the advantage they would not squander.

Comer, O’Neill, and Finnerty all converted before Turbitt hit the woodwork leaving Tierney the man with the chance to win it.

Tierney smashed into the bottom left off his left foot sending Rafferty the wrong way, as Galway advance to their first Semi-Final since 2018.