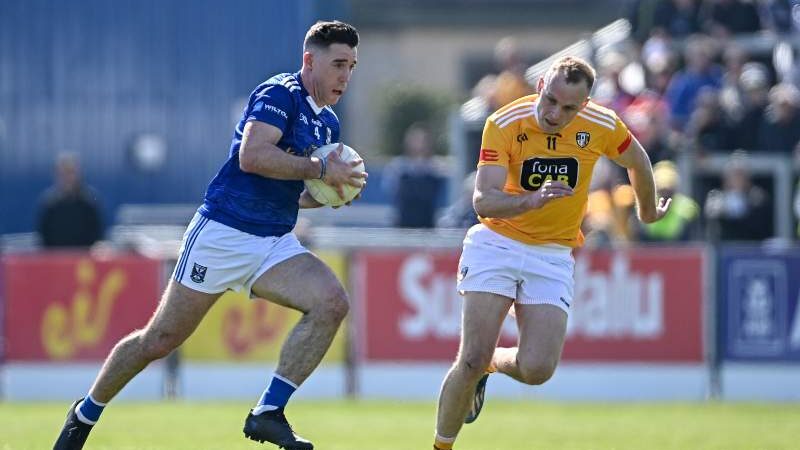 A second-half flurry was enough for Cavan to progress to the Ulster Senior Football Championship, beating 14-man Antrim 1-20 to 0-10 at Corrigan Park today.

A second-half flurry was enough for Cavan to progress to the Ulster Senior Football Championship, beating 14-man Antrim 1-20 to 0-10 at Corrigan Park today.

A fairly wasteful shooting performance in the first-half from The Breffnimen meant that they were only ahead by a point at the break, but an early onslaught after the restart helped them storm ahead.

Mickey Graham’s men dominated proceedings from the first whistle but failed to get a score until five minutes in when Gerard Smith kicked the ball over.

After a few shots dropped short into the hands of Antrim goalkeeper Michael Byrne, James Smith doubled their lead followed up shortly by Gearoid McKiernan to make it 0-3 to 0-0 before 20 minutes.

Antrim struggled at the start of the game to hold on to the ball, Ryan Murray managed to get their first score after 25 minutes with a great point off of his left foot.

Patrick Lynch scored his first of eight points just after and the game began to open up.

Antrim forced a lot of turnovers from goal kicks to start getting scores on the board and it was Murray again who scored for Antrim to make it a one point game at the break as Cavan led 0-7 to 0-6.

Cavan had 17 shots at the break but had only managed to get seven scores.

However, they began to pull away in the second-half, Lynch getting two quick scores and Raymond Galligan scoring a free to make it 0-11 to 0-8.

Things went from bad to worse for The Saffrons when Michael McCann received a second yellow card for a foul on Patrick Lynch.

Lynch would get his sixth and seventh points from frees in the following five minutes.

Gearoid McKiernan would put the game to bed with 10 minutes to go when he put the ball into Michael Byrne’s net to extend Cavan’s lead to nine points.

Cavan would score four more points in the final 10 minutes to put the result beyond doubt.

They will face either Armagh or Donegal in the semi-final.