Tailteann Cup: Cavan deliver against Down 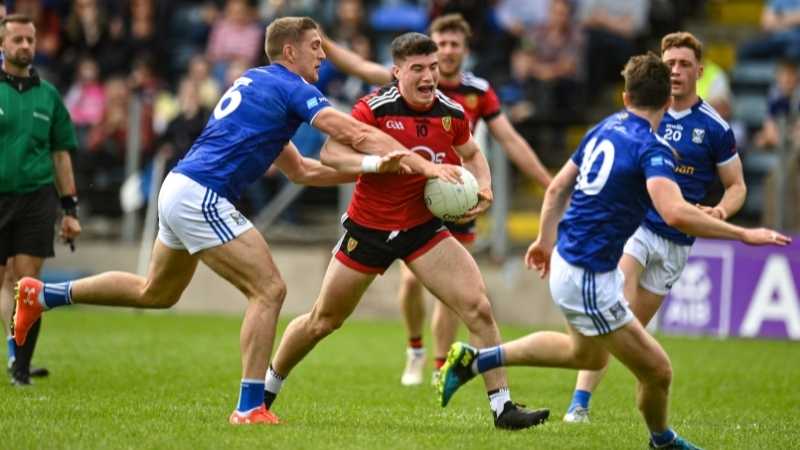 Cavan booked their place in the quarter-finals of the Tailteann Cup with an impressive nine-point home win over Ulster rivals Down this afternoon.

It wasn't all about the hosts in this encounter, and indeed the Breffni County trailed by 1-0 to 0-0 after just five minutes when Ruairí O'Hare grabbed a goal for Down.

However, Cavan quickly grabbed a lead they wouldn't relinquish, firing the next six scores.

Points from Gerard Smith, Ray Galligan and Paddy Lynch levelled the contest by the eighth minute, before further scores from Oisin Kiernan, James Smith and Galligan ensured a 0-6 to 1-0 lead by the 14th minute.

Odhran Murdock and Paddy Lynch swapped scores, before Galligan's third point from a placed ball left the tie at 0-8 to 1-1 in his sides favour on 24 minutes.

Barry O'Hagan delivered a much required score for Down from play, but Cavan took control once more.

Four unanswered points, including three-in-a-row from Gearoid McKiernan pushed them seven ahead by the 31st minute.

Anthony Doherty and Galligan swapped scores, before Cavan's Paddy Lynch picked up a black card deep in injury-time, after a foul on O'Hagan.

However, Down failed to take advantage after Galligan saved twice, and Cavan took a 0-13 to 1-3 interval lead.

Down rang the changes at half-time, with keeper Niall Kane making way for Rory Burns, while Andrew Gilmore entered the fray for Ruairí O'Hare.

Cavan continued to show their experience on the restart and extended their lead to nine points midway through the second period following a Thomas Edward Donohoe score.

Down battled hard with the likes of Ryan Magill and substitute Andrew Gilmore taking scores, but with McKiernan, Lynch and Galligan impressive, there was no doubting Cavan's place in the next round.