Tailteann Cup: Leitrim move into next round 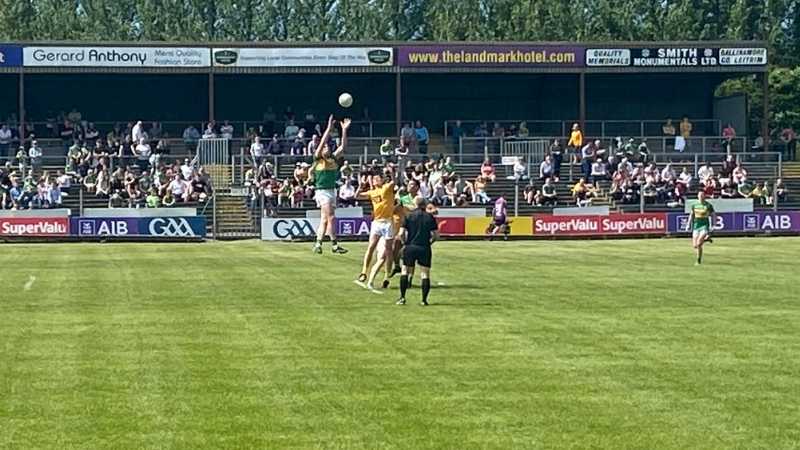 Leitrim progressed through Round 1 in the Tailteann Cup with a famous five point victory over Antrim today at Avantcard Páirc Seán Mac Diarmada.

A first-half where Leitrim won their individual battles and Keith Beirne starred with five scores saw them in complete control. As Antrim missed numerous wides, a Shane Moran first-half goal saw the Andy Moran’s team eight points up at the break.

Pat Shivers’ four points and Peter Healy’s goal inspired an attempted Saffron comeback but Jack Heslin’s second-half finish for Leitrim helped them hold on as the game ended 2-14 to 1-12.

The Wild Rose County simply wanted it more this afternoon in a beautifully set Carrick-on-Shannon, and so they are the victors in this second ever Championship meeting with Antrim.

After a flat first-half where the home team were far more hungry and physical, Antrim did all they could in the second period but it wasn’t enough.

Keith Beirne as usual had the goalposts perfectly mapped out in his mind, scoring six points and five of which came in a first-half where his team were right up for it. Antrim’s Odhran Eastwood fisted over straight into the match but the visitors would only score twice more until the last minute of the half.

Moran’s men went two points clear moments later thanks to points from Beirne and captain David Bruen, and from here on they nearly played Antrim off the park for 35 minutes.

Beirne continued to kick over consistently while a brilliant solo score from Cillian McGloin and Shane Moran’s goal gave them an unprecedented eight point gap at the break.

The Saffrons really didn’t have their shooting boots on and they got just their fourth point right on the mark of the break through Dermot McAleese.

Enda McGinley needed big words at half-time as his side's body language had been completely off and the performance was much better for the remainder.

It looked bad for them though when Jack Heslin scored a second goal for the Connacht side after 39 minutes.

However the Saffs kept fighting and when skipper Peter Healy hit the net on 55 minutes they started to believe. Meanwhile Pat Shivers’ brilliance to kick four successful points in the half also helped their bid to catch Leitrim.

Moran did a great job of bringing on subs who would keep the pace in Leitrim’s game and be able to pluck away at scores as Mark Plunkett and Jordan Reynolds grabbed points off the bench.  After Beirne scored again in stoppage time to make his tally 0-6, moments later Shivers received a second yellow.

The hosts stayed alert to a potential comeback and managed the game well to earn a hugely impressive win over Antrim. Beirne, Moran, Heslin and Wrynn were stand out players and were a constant reply to Antrim’s sloppiness.