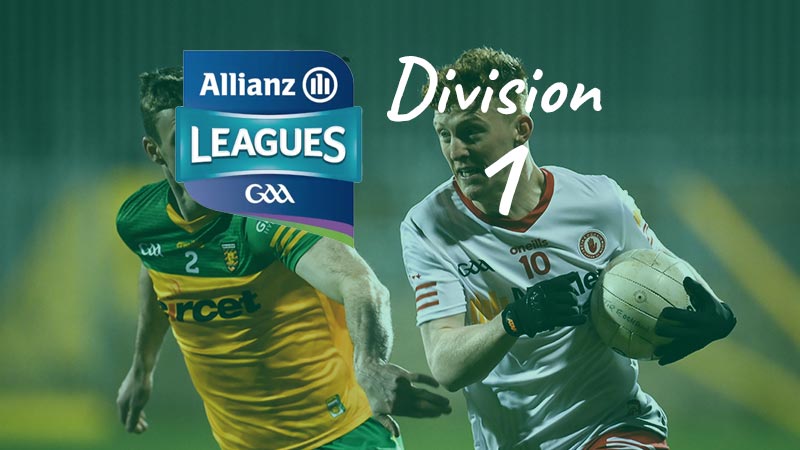 Kerry and Mayo will contest the final of Division 1 of the Allianz Football League, after Mayo were victorious over Kildare this afternoon, while at the bottom of the table Dublin are relegated after their shock start to the season, while Kildare also go down after a valiant showing this year.

A late Jack McCarron free sees Monaghan remain in Division 1 next year, while Dublin are relegated following the one point defeat, a Dean Rock injury time penalty looked to have saved the Dubs but McCarron was accurate as ever to see them home, as both teams finished with 14 men

Dublin started the better in the opening half, pulling out a 0-4 to 0-1 lead, before Monaghan came back Sean Jones hitting the net after nine minutes, to lead 1-3 to 0-4 but the momentum would shift throughout the half, but Monaghan held firm to lead 1-7 to 0-8 at the interval.

Monaghan remained ahead after the restart pulling out a 2-9 to 0-8 lead as McCarron buried a penalty in the 41st minute, Dublin started to come back into the tie and shortly after Ryan Wylie was sent off, before James McCarthy was sent off, amidst the drama McCarron had made it 3-10 to 0-14, a dramatic end but Monaghan will be happy with the result in the end.

A late score by Paddy McBrearty gave Donegal a final day win in Letterkenny, a blow for Armagh as it sees them miss out on a league final after a great season, Donegal had laid the marker down in the opening half but Armagh never looked like giving up the tie, with the final their most important goal.

Donegal got out of the trap early in O’Donnell Park, they were controlling a free flowing contest before Jason mcgee hit the net after 10 minutes, to push them 1-04 to 0-02 ahead, it remained in the hosts favour for the majority of the half, but Aidan Nugent reduced their lead to 1-08 to 1-05, as he goaled after 32 minutes, but Michael Murphy and McBrearty scored late in the half for a 1-10 to 1-05 lead at the break.

After the restart Donegal remained ahead, Murphy missed a penalty for them midway through the half, with Armagh slowly reducing the gap trailing 1-12 to 1-11 after 19 minutes in the half, Rian O’Neill levelled just before injury time but the final act fell to the hosts with McBrearty remaining a key man in the Donegal setup.

Tyrone survived a last day relegation battle with a one point win over Kerry in Killarney, a performance good enough to see them remain in the Division, as they battled hard to get the points over Kerry in the end.

Knowing the stakes going into the tie it was Tyrone that edged the opening half of football in Killarney, it was a slow start to the game but a Tony Brosnan goal after 15 minutes looked to have kicked the game into life. Tyrone came back to level matters after 20 minutes, before leading 0-7 to 1-2 minutes later, David Clifford kept Kerry in the game before Tony Brosnan made it 1-5 to 0-9 at half time.

It was hard to separate the teams into the second half, Brian Ó Beaglaíoch kicking an equaliser in the 41st minute, Tyrone went ahead again before Brosnan hit the net again this time from a penalty, 2-7 to 0-11 in favour of Kerry but Tyrone remained in the tie and hot a goal minutes later to regain their lead.

Paul Geaney kicked Kerry level before Clifford put thema point ahead, back came the visitors before Gavin White added a point as he returned from injury, three unanswered points had the Ulstermen two ahead of  injury time, before Geaney halved the deficit in the 69th minute, neither team could find the mark in added time as Tyrone survive.

Mayo await Kerry in the League Final after finishing well to dispatch a game Kildare, they looked strong throughout and are rewarded with a chance at silverware if they can defeat an old foe.

After a frantic opening half it was Mayo who had a final spot while Kildare looked to be relegated, it was a terrific game for neutrals alike as Mayo were ahead 1-10 to 0-12 at the break, Ryan O’Donoghue finding the net after 12 minutes, a lead they held until the 26th minute when Ben McCormack pointed for a 0-10 to 1-6 lead, it was a nervy few minutes to end the half but Mayo were ahead at the break.

Mayo kept their lead intact after the restart building on their scores, before Jordan Flynn found the net after 14 minutes, to put breathing room between the teams 2-14 to 0-16. The hosts continued to control, the tie, their forwards including O’Donoghue, Jason Doherty and Jack Carney in sensational form as they helped kick them into the decider with the Kingdom,