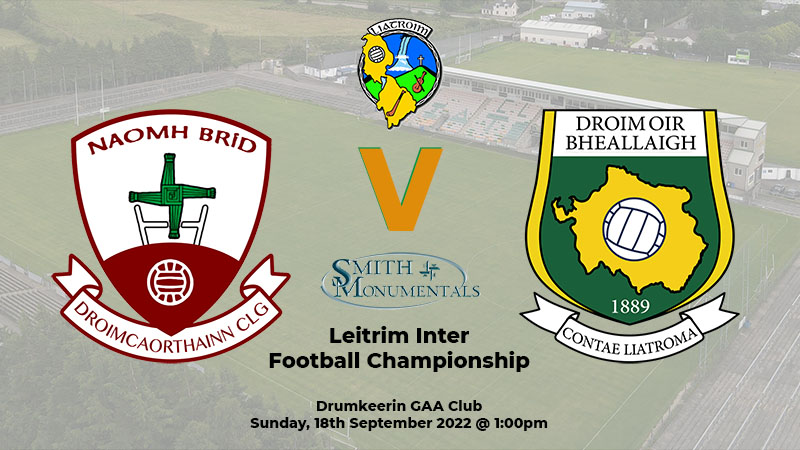 Drumkeerin progressed to the Quarter Finals of this year’s Smith Monumentals Intermediate Football Championship following a three-point win over Drumreilly in Drumkeerin on Sunday.

This was a winner take all contest and it was the home team who got through in the end and in doing so, will now meet Kiltubrid in the Quarter Final.

Drumreilly were dealt an early blow when they lost Graham Taylor to injury in the first few minutes with David O’Connor replacing him but they did open the scoring, a Nigel Maguire point from play after five minutes.

The home team then hit three points without reply through Francie Davitt (free) and two from Cathal McCawley, one from play and one from a “45”. The first goal of the game came on twenty minutes when slack defending allowed James Holohan in to fist the ball to the Drumkeerin net to give his side a one point lead.

Seven minutes without a score but then three scores in as many minutes for the home side, a goal and a point from McCawley and a free from Jerome Maguire to go four points up. Drumreilly ended the half with a couple of points, a free from Gaffney and a point from play from Maxwell to leave just two points between the teams at the break.

James Gallagher (Corry) replaced Tommy Rogan at half time for the home side but it was his namesake who hit over the opening point of the second half. Gaffney and McCawley (free) exchanged points before two points in as many minutes from the visitors, both from distance, left just a point between the teams, Gaffney and Maxwell the marksmen.

But in a three minute spell, the game swung in the favour of Drumkeerin when substitute Gallagher hit a point followed by a goal and suddenly there was five points between the teams. They had a great chance to put the game to bed when a foul on Ross Harrison led to a penalty, but McCawleys well taken shot was brilliantly saved by Damon Maguire to keep his side in the game.

Harrison moved forward again and hit over a good point to be followed by similar scores from Gallagher (Creevelea) and Davitt, eight points the margin and looking good for Drumkeerin. But never rule out Drumreilly, and they got back into the game with a Gaffney goal and he hit over a free with two minutes of ordinary time left to reduce the deficit to four.

Into added on time and another Gaffney free tapped over to leave just a goal between the teams, nervous times for the home team. But time ran out on the visitors with Drumkeerin holding out for the victory, but not before referee Seamus Mulhern, on the instructions of sideline official Vincent McMorrow, issued a straight red card to James Gallagher (Corry) when the game was over following an incident just on the final whistle.