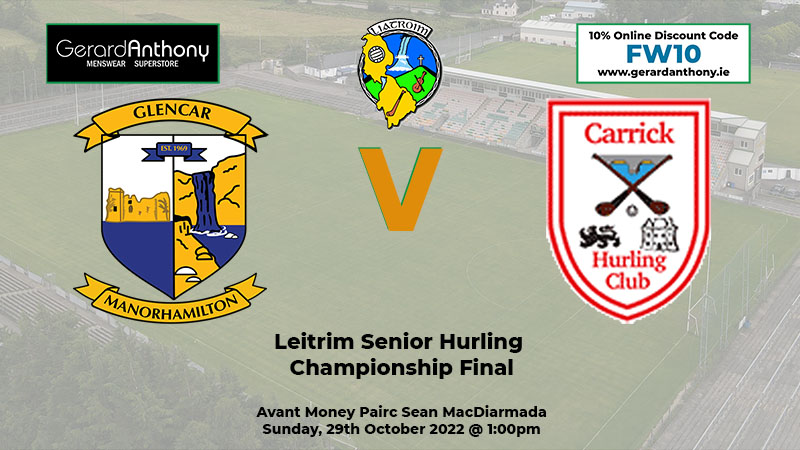 Last year we had a tight game that went down to the wire with Cluainín winning by a point, this year it was a reverse of that result, as the goal in injury time saw Carrick avenge the defeat from last year.

Clement Cunniffe was an exceptional scorer for Carrick, while the trio from the Moreton household, Colm, Donal and Enda all helped Carrick record success. While Conor Beirne at the back was solid.

Gavin O’Hagan was exceptional in the full forward line for Cluainín Iomáint, his scores crucial in keeping them ahead, while Pearse Dolan’s first half goal was the catalyst in Cluainín going ahead in a dramatic game of hurling.

Conor Berine had Carrick ahead in a tightly contested opening half after a minute elapsed on the clock, Gavin O’Hagan had Cluainín level after three minutes with their first score of the game.

It was nip and tuck as the sides shared a point each to be level for the second time after seven minutes, when Carrick would go ahead it was Cluainín that were quick to reply. Colm Moreton had a great chance at goal in the eight minute but he struck the post, however James McNabola was there to tap over the bar for a 0-3 to 0-2 lead.

Martin Feeney levelled the tie for the third time from play after ten minutes, before Clement Cunniffe notched Carrick ahead seconds later. It was frantic and nip and tuck as little could separate the teams, Niall McLoughlin had Cluainínlevel again after 12 minutes, but a great save from Peter Poniard ensured Carrick failed to find the net by the end of the opening quarter.

Sean O’Riordan and Gavin O’Hagan exchanged scores as Cluainín remained in the tie able to keep at the pace of Carrick, O’Hagan had them ahead for the first time after 22 minutes as he landed a free.

O’Riordan followed suit to level for the sixth time of asking in the tie, but Martin Feeney delivered a great ball into Pearce Dolan and he gosled to give Cluainín a huge advantage right before injury time, 1-6 to 0-6. Clement Cunniffe pointed into added time to leave two between them at the interval.

Cunniffe was pivotal from the frees as he helped Carrick tie the game for the seventh time as he struck two early frees in the second half. It took 12 minutes for Cluainín to get going in the half but they hit back well, Pearce Dolan and two quickfire O’Hagan points, including a monster from over 65m out, put them ahead by three 1-9 to 0-9 after 44 minutes.

O’Hagan struck a third without reply after 47 minutes as he added yet another free, Cunniffe was called upon to end the rut for Carrick, as his converted free in the 49th minute made it once again a three point game.

O’Hagan added another free to make it four points the lead for his side, however Carrick never let off late on, Diarmuid Kelleher and another Cunniffe free had it 1-11 to 0-12 as we entered three minutes of added time.

Straight from the puck out Poniard made another crucial save to deny Enda Moreton, Colm Moreton found Enda but the keeper did well to save.

A dramatic end would happen to the tie, Colm Moreton with the final puck of the game found the back of the net in the 63rd minute, to see Carrick Hurling become champions for the fourth time in five years.