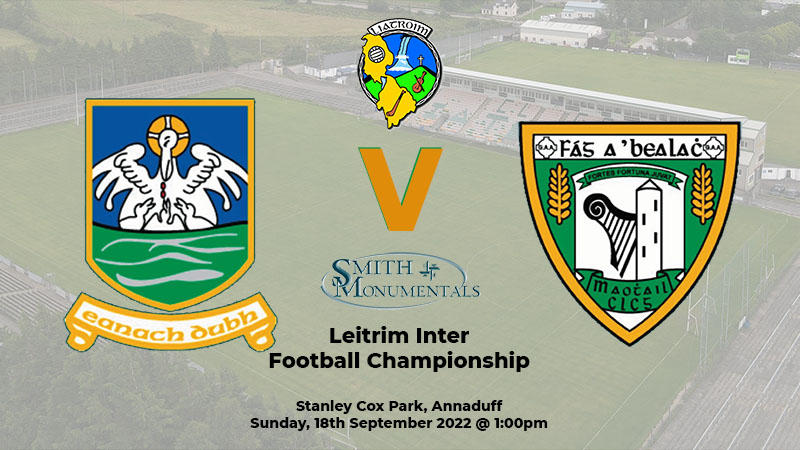 Annaduff cruised into the semi-finals of the Smith Monumentals Intermediate Football Championship after a comprehensive 33-point victory over Mohill at the Annaduff GAA Grounds, as the home side won by 4-26 to 0-05.

Both teams were severely depleted through a combination of injuries, and in the case of Mohill, ineligibility due to having five of the team playing in the senior quarter-final the evening before.

The sides were level after six minutes as Eoin Gill for the home team and the visitors’ Barry Lupton (free) swapped points.

Annaduff slotted over the next four points courtesy of a brace from Jack Hughes, and a point each for Hugh Moylan and Adam O’Hagan, while Niall Flynn fired over a point for Mohill, to leave the home side ahead by 0-05 to 0-02.

Kenny Cox, Gavin O’Brien, Sean Quigley and Cox again splitting the uprights before Alan Glancy raised a green flag on twenty-two minutes, after he took advantage of a poor kickout from Mohill keeper Jason Farry, by exquisitely lobbing the ball over the stranded Farry to the back of the net.

Barry Lupton replied with a converted free for the visitors, only for Hughes with his third point and Gill’s second of the match increased the advantage to eleven points.

Daniel Gordon slotted over Mohill’s fourth and final score of the half but Annaduff finished strongly with the last two points of the half, courtesy of Frank Shanley and Eoin Gill’s third point of the contest to lead by 1-13 to 0-04 at the interval.

Darragh Gordon with his second score of the match got the visitors only score in the half on forty-five minutes but the game was over as a contest with Annaduff leading at that stage by 1-17 to 0-05.

In the forty-eighth minute, Jack Hughes scored Annaduff’s second goal. Daniel Bosquette intercepted a Mohill attack, played a great ball to Hugh Moylan, and he delivered a diagonal hand pass to Hughes, he evaded the challenge of Ciaran Kennedy and despatched a low, curling shot to the bottom left corner of the Mohill net.

Hughes, Quigley, Taylor and Kenny Cox all raised the white flag to put the home side up by 2-22 to 0-05 as the contest entered the final five minutes.

Kenny Cox then added two more goals with Eoin Gill adding a brace of points in between those two goals.

Cox then added his fifth point before Bosquette completed the scoring just before the final whistle.

The victory coupled with Allen Gaels three-point win over Aughnasheelin means that both Annaduff and the Gaels pip Aughnasheelin for the two automatic semi-final spots on scoring averages.